Lessons from the garden 2022

As we’re in the process of putting the garden to bed for the winter, it seemed as good a time as any to recap some lessons that we learned this growing season. Starting with the greenhouse… 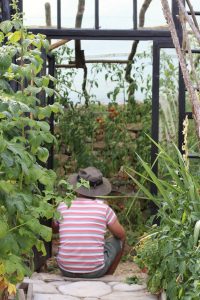 Is it really worth having a greenhouse?

In the words of Meg Ryan in When Harry Met Sally, ‘YES, YES, YES!’ Our greenhouse took an age to build from reclaimed windows and foraged wood (in fact, it’s still not 100% finished. There are some window gaps to plug, and we still have to do a proper gravel pathway and edging for the beds. So there’s a bit of final finessing to do next year), but it’s already an amazing addition to the garden.

Case in point: look at this bumper harvest of tomatoes that we picked on 6th November. 6th November, guys! I don’t think we’ve ever picked so many tomatoes so late in the year. 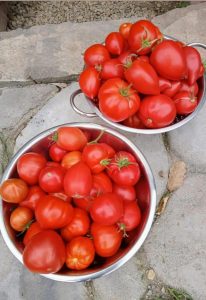 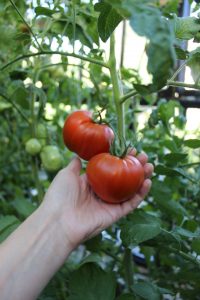 Tomato production has slowed down since then – naturally, the nights are getting much colder – but I still picked some ripe tomatoes today, just before writing this.

So, a longer growing season is one of the main benefits we’ve noticed. But we’ve also had less blight than we were getting in the wonky polytunnel. Probably because there’s better air flow and less crowding in the greenhouse (it’s considerably taller than the polytunnel was and the growing beds are wider, so the plants aren’t quite as packed in). We still get a bit of blight, but not enough to warrant spraying. Whereas, in the wonky polytunnel in the height of summer, Rob would have to spray the tomatoes every two weeks (with organic Bordeaux mix) to battle the blight.

Also, from an aesthetic point of view, it’s really nice to have a permanent focal point at the end of the veg garden.

So if you’ve ever thought, ‘We should build a greenhouse one day,’ and if you like growing and eating tomatoes, DO IT. You won’t regret it.

I’m not giving up on lettuce, but…

If you’ve been here a while you’ll know that lettuce is my nemesis. I like eating it. I like growing it. But it doesn’t love me back and I struggle to grow it well. Our summers are too hot, and spring and autumn can be unpredictable. I persevere, and always manage to grow enough for some nice salads across May and June. But I want a regular supply of leafy greens across the whole season.

So this year we’ve been eating different leaves to supplement my sad lettuce efforts. Especially beet leaves and nasturtium. The beet leaves are really good to eat raw if you pick them when small (that said, bigger leaves will wilt nicely into curries and stews, like spinach). And, in my experience, you can pick quite enthusiastically from the leaves without harming the growing beets – so long as you leave a few leaves per plant.

As for nasturtiums, the leaves and flowers are probably my favourite salad ingredient. Both the leaves and flowers taste peppery like rocket (another salad leaf that I struggle to grow), they’re beautiful on the plate (and in the garden), and the plants are pretty much bombproof, so long as you keep them watered.

My tip is to do a sowing of nasturtiums in April – I sow in pots at that time of year, just so I can control the temperature better, but they can be sown direct. Those spring-sown plants will see you through until July, when the plants start to struggle in the heat. (Here in Bulgaria, at least. They’d probably struggle less in the UK.) At that point, do another sowing (I sow direct at that time of the year) and you’ll get a second healthy crop from late August/early September onwards, when the temperatures are a bit cooler. I’m still picking nasturtium leaves even now.

We also use the smaller leaves from our kale plants in salads, for a bit of extra texture and flavour. But that’s maybe not everyone’s cup of tea.

While we’re on the subject of sowing stuff in July…

I also did a second sowing of beans in late July, direct in the ground, and we got a lovely crop in September and October. I’ll be doing that again next year.

Sow your coriander in the autumn

Like lettuce, coriander struggles in our hot summers. I still do a sowing of coriander in the spring, and it does come up, but it bolts quickly. That’s fine. The flowers are pretty, and I make sure I get enough coriander leaves in the freezer before the plants fully go over.

But one thing we’ve learned is to also sow coriander in the autumn. (We just sowed some in early November.) The seeds will hibernate in the ground over winter and shoot up as the ground warms up, so you’ll have a bumper crop of coriander in spring, while your new seedlings are just getting established.

Check out this epic bunch of coriander that we picked in May of this year, from seeds down in autumn 2021. 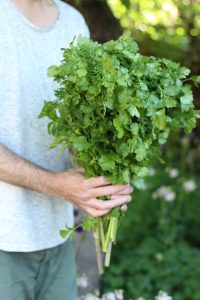 Every year I grow basil and chillies from seed, and every summer we end up going to the market to buy extra plants to supplement our homegrown efforts. And especially with the chilli plants, the ones I buy from the market are always much, much stronger and further ahead than my own plants. We’ve had SO MANY chillies this year off our plants from the market. We’ve eaten loads as they’ve ripened. We’ve got kilos of chillies in the freezer. We’ve got several strings of dried chillies. And a few jars of pickled chillies as well. Chillies all over the place, in other words. (Note to my future self: make loads more jars of pickled chillies. They’re amazing on, well, everything…)

So next year I’m going to save myself the bother – and the compost – and just buy my chilli and basil plants from the market.

So those are my biggest takeaways from this year’s Gardening Bore antics. Those that I can think of, anyway. Have you learned anything from your garden this year? What are you looking forward to about next year?

Finally, a quick cider update: Rob bottled our batch last week and we got 37 bottles (that’s the IKEA bottles, which hold, I think, 1.2 litres per bottle). It’s a really tasty batch – nicely alcoholic, slightly fizzy (and will get fizzier in the bottles), and typically cloudy and wholesome looking. Here’s to a winter of cider consumption!