How we make cider

I say ‘we’ but this is mostly an annual Rob endeavour. I help out with the picking and chopping of apples, then I entirely check out of the process until it’s time to drink the stuff. Writing this post therefore meant shaking the details out of Rob’s head via a string of interesting questions, such as, ‘But then what?’ ‘How long did you wait?’ ‘How much sugar?’ and – ominously – ‘How much bleach exactly?’

This, dear reader, is the result.

It’s probably not 100% clear in places. And when it comes to the fermentation stage, it’s all about how the cider looks and tastes, which means it’s hard to give super-specific instructions. (Every batch has behaved differently at this stage.) But do feel free to ask questions and I’ll relay them to the cider maestro himself.

This is a long one, folks, so grab yourself something caffeinated and get comfy for our stroll through the cider-making process. I’ve included pictures where I remembered to take them – just click to view the pictures bigger/as a slideshow.

Apparently, there are speciality cider apples, but we don’t bother with that guff in this house. Regular (homegrown, organic) eating apples work just fine for us. It really doesn’t matter what types – although Rob says it’s nice to include a few different varieties of apples if you can, just to get a more interesting flavour. In the past, we’ve even thrown in some crab apples (good for adding tannins and acidity, says Rob) and pears to bulk up the volume. Our most productive apple tree gave us nothing this year. Zilcho. So all the apples came from our neighbour and some friends who have loads of apple trees. Thank God for them.

Our starting point, then, was seven sacks filled with all sorts of apples. Some a bit bruised and rescued from the ground. Others picked off the tree. 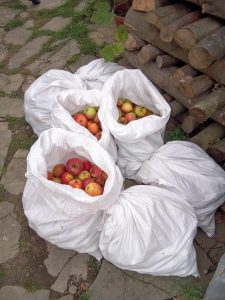 This phase starts with sterilising the tubs that the chopped apples will go in. (Oh yeah, baby, you get all the exciting content here.) We use those big, plastic 60-litre tubs with screw-on lids that are everywhere in Bulgaria, and Rob sterilises them with a simple bleach solution. For each one of these tubs he did 20 litres of water to 80 ml bleach. Mix it up in the tub and leave for 20 minutes, agitating the solution regularly so it gets sloshed all over the inside of the tub. Then drain and rinse. Repeat with any other tubs.

I’m not going to lie, this is a big, boring job. It takes us around 8–10 hours of chopping. (That’s with me pitching in for a few hours but Rob mostly doing it on his own. I have a JOB, people.)

At the end of all that chopping, we had three 60-litre tubs filled with chopped apples.

You can leave the chopped apples in the sealed tubs for two or three days. (You don’t have to do this – I’m just saying you don’t have to move onto the next phase immediately.) Rob likes doing this because he thinks (no scientific proof for this) that it helps to soften the apples up for the next phase.

This phase is all about bashing the shit out of the apples to turn them into a rough pulpy mess. We’ve tried all sorts of methods in the past. Remember that time Rob used the petrol strimmer to strim them to death? I’m happy to say we’ve finessed the process since then.

A few years ago, Rob made his own scratter tool (or, as I like to call it, ‘apple torture device’). It’s a box with a rotating wooden cylinder with flat-head screws sticking out of the cylinder. You turn the cylinder (via a handle) and the apples get gradually broken up by the screws, and what falls down into the pan below looks like brown, puply, messy, grated apples – the technical term for this pulpy apple mess is ‘pomace’, according the Rob. The fucking nerd. 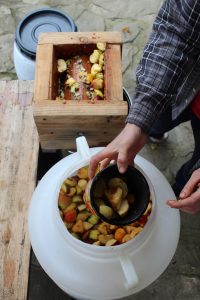 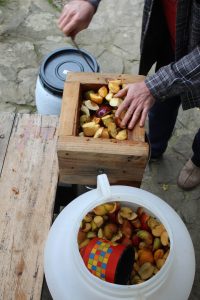 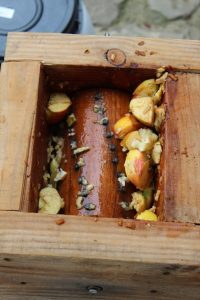 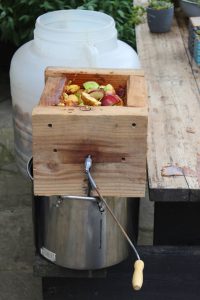 The scratted apple bits need to go into nice, clean tubs. And that means more sterilising, I’m afraid. (I’m sure he also sterilised the scratter tool with, at least, some boiling water, but I forgot to check with him.)

By the end of this scratting phase, our three tubs of chopped apples had become two 60-litre tubs of scratted apple pulpy bits. Rob always leaves these tubs sat around outside for a couple of days before moving onto the next phase because it seems to help the apples release their juice. 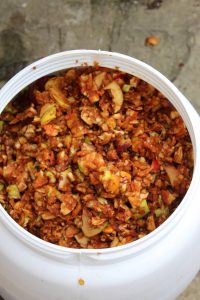 Now it’s time to press the pulpy mixture to extract the apple juice. Rob used to do this with a car jack and a simple, homemade wooden box with a hole in it for the juice to run out. It worked really well, but was slow going because he could only press a tiny amount at a time. But now we have a proper hand-cranked cider press (just a cheapo thing from Metro).

Here’s how Rob does the pressing bit: he packs a clean pillowcase with apple pulp (the pillowcase – or any other kind of cloth – stops the pulp from getting into the juice). Then he puts the filled pillowcase into the drum of the press, fits the top plate and handle, and then starts cranking, gradually pressing the apple-filled pillowcase into a compacted cake. Meanwhile, the juice runs out the bottom of the press into a clean pan. Once every scrap of juice has been pressed out, he empties the pillow case (onto the compost heap) and refills it with the next batch of pulp. Press. And so on and so on. 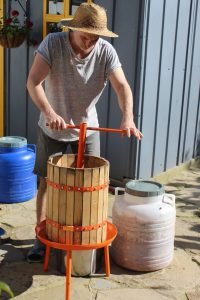 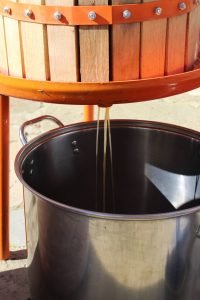 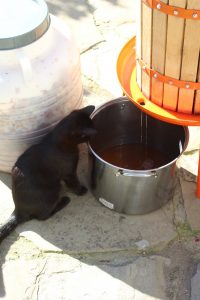 Bobby, I added a cat, just for you.

After pressing all the apples, our two 60-litre tubs of apple pulp (I refuse to call it pomace) had yielded roughly 40 litres of apple juice. All of which gets poured into a freshly sterilised tub. Yes, you have to sterilise the tubs again. (All the sterilising is by far the most boring bit.)

Add sugar to turn the juice into cider

So instead of dissolving sugar in some of the juice, Rob made a sugar solution of roughly 12 litres of water and 1.5 kilos of sugar (heating the water to dissolve the sugar). Then he added that to the big tub of juice, giving us a total of roughly 52 litres of liquid. This is probably very unorthodox, and I’m sure cider snobs would turn up their noses at diluting the cider like this, but it’s fine. He’s done it before and we always get fab cider at the end. 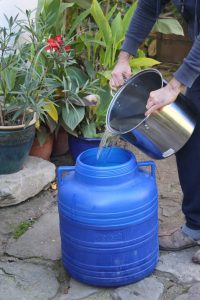 By the way, Rob would like you to know that there’s no need to add any yeast at all to the juice because the natural yeasts will do the job for you. So, cider is a miracle concoction of just apples, sugar, and in our case, some water. Isn’t it amazing?

At this point, we give it a taste – it should taste like a lovely sweet apple juice. But don’t worry, the sugar will turn to alcohol, and it’ll become less sweet over time.

Next, he moved the tub to an unheated hallway in our house (any cool spot will do) for the fermentation period. At the time of writing, it’s been there for two weeks, but the cider will stay in the tub for four weeks in total. You can leave it for longer if you want a clear cider, but we like a cloudy cider so four weeks is perfect.

Once a week during this four-week fermentation period, Rob checks the cider to see if it’s bubbly and whether it still tastes sweet. Bubbly is good because it means it’s fermenting well. And if it still tastes sweet, there’s no need to add any more sugar yet. But if it no longer tastes sweet (because all the sugar has turned to alcohol) and the bubbles have stopped, it’s time to add more sugar.

How much sugar, you ask? Well, how sweet do you want it, how strong do you want it, and how long is a piece of string? So far, for this batch, Rob has only added that initial 1.5 kilos of sugar (as I say, we’re only two weeks into the ferment, and still have another two weeks to go, and at this point it’s still bubbling its way through that first batch of sugar). But Rob expects he’ll probably add another kilo or two of sugar by the end of the four weeks. Anywhere between one and four kilos of sugar – depending on how sweet your initial juice was, and how strong you want your cider – is about right. The more sugar, the more alcoholic your cider will be.

This is the part that’s all done by taste and instinct, I’m afraid, so it’s hard to give specific quantities and timings.

To test the cider once a week, Rob sterilises a ladle in a pan of boiling water, then just ladles a bit of cider from the tub out into a glass. Basically, just make sure whatever implement you stick in the cider is sterilised. Take it from us, it’s perfectly fine to drink the whole glass during this testing phase (in fact, it’d be rude not to). It’s not finished fermenting, but it still tastes good. 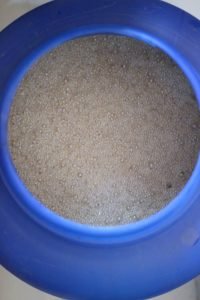 This is what it looks like after two weeks.

After about four weeks of fermenting – and assuming it tastes like delicious cider and you’re happy with the strength – it’s time to bottle it. Ours is usually still very slightly fizzy when we bottle it, which means it’s still fermenting a little. We like a fizzy cider, so that’s good for us. But as I said, you can carry on fermenting past this point and you’d end up with a clear, still cider. But we prefer to bottle ours while it’s still a bit lively.

Sterilise your bottles by washing in hot soapy water and drying in a low oven. (By the way, IKEA sells glass bottles that are cheap, sturdy and brilliant. We’ve been using them for years.) Sterilise the bottle tops by boiling in a pan for a few minutes.

The easiest way to get the cider into the bottles is to syphon it with a sterilised tube. Oh, and we might add a couple of teaspoons of sugar to each bottle before adding the cider, if we want it to be even fizzier. It just depends on how the cider is when we come to bottle it. (Warning: adding sugar to the bottle does mean the cider will be a little, erm, jubilant when you come to open it. Maybe open over a sink!)

Fill the bottles, seal and store in a cool place. (One year, we inadvertently put a bottle on a shelf in front of a hot water pipe, prompting a cider explosion all over the pantry. We were still finding sticky patches a year later.)

And that’s it, folks. You can drink your lovely cider straight away, but it’s better to wait a few weeks if you can bear it. (We usually can’t.)

I hope that helps and doesn’t make the cider process sound too daunting. It’s pretty easy, really, just a bit time consuming in terms of chopping, scratting and pressing – but after that, the cider does all the hard work for you. And so long as you keep everything clean, you can’t really go wrong – you’re bound to end up with something drinkable.

Are you inspired to give it a go?