If you’re wondering where I’ve been all month, we went to England for two weeks, which was rather nice actually, and I got COVID, which wasn’t so nice. Not that I was very ill, luckily. It was more inconvenient than anything, isolating in a house with a partner who doesn’t have COVID. (Rob somehow didn’t catch it from me in the couple of days when I was probably contagious but not yet showing symptoms. The jammy git.)

Cue separate bedrooms, me wearing a mask, constant hand-washing, bleach-cleaning the taps and door handles every five minutes, etc. I consider myself lucky that my worst COVID outcome is my hands have aged 20 years in 10 days and my face has erupted into furious acne. (Simultaneously having wrinkly old crone hands and a teenage boy’s spotty jawline is … interesting. First world problems and all that.)

But now I’m free to roam and spread my normal, COVID-free bodily bacteria around the land. It’s good to feel the air on my (spotty) chin once again.

And what am I doing with my new-found freedom? Staying home, watching Gardeners’ World and writing endless lists of seeds to sow and garden jobs to get on with! Naturally. Because, yes, it’s time for Gardening Bore 2022.

(At this point I imagine crowds going wild and whooping in joy at the start of another Gardening Bore season. While in reality, my readers – all five of you – probably just raised a mildly quizzical eyebrow and thought, ‘Huh, is time for her to wang on about courgettes already?’ Yes it’s that time already, people. It’s April. Last time you checked it was January, then you blinked and now it’s April.)

We’re not doing too much new stuff in the veg garden this year. We’ll stick with the usual favourites of spuds, tomatoes, butternut squash, courgettes (of course), kale, beetroot, green beans, chillies, salad, and loads of herbs. We really enjoyed growing sweetcorn last year – we didn’t get a huge harvest, but what we did get was delicious – so we’ll be doing that again. I think the only new crop we’re trying is broad beans. No idea how they’ll get on in the Bulgarian climate, but we’ll see. Green beans, grown for their pods, always seem to do well for us.

In terms of fruit, last year we planted some raspberry canes, blackcurrant bushes, new grape vines and a new apple tree, so I’m hoping all those came through the winter unharmed. Our strawberry and blackberry plants are well established and always offer up a bounty of fruit. And fingers crossed we’re in for another good apple year as last year’s cider batch was outrageously good. 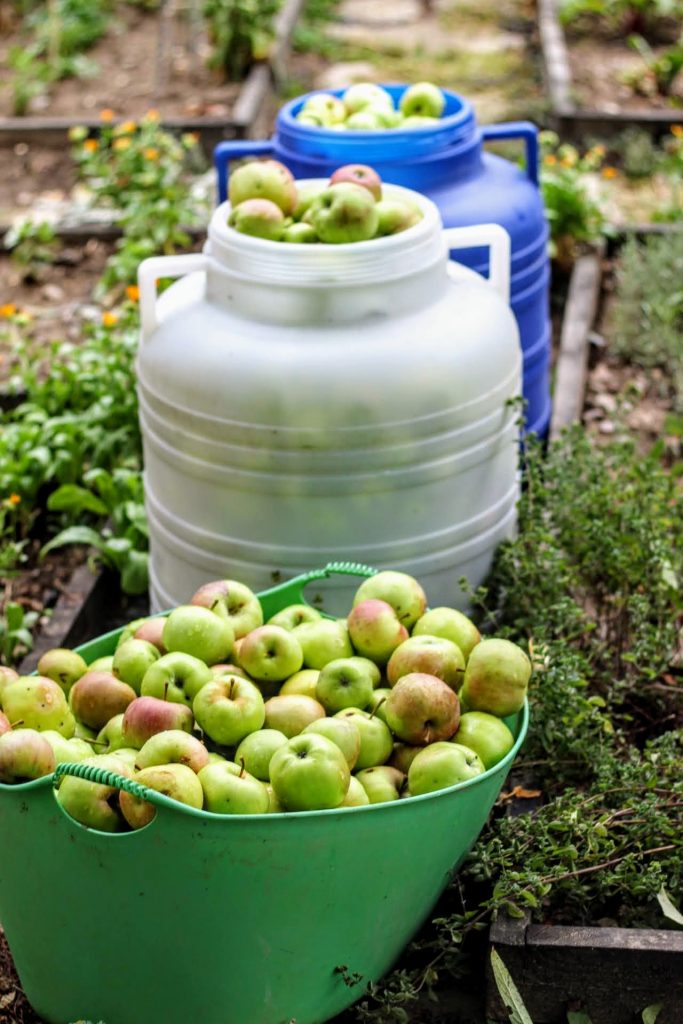 Some of last year’s apple harvest.

The asparagus, rhubarb and wild garlic are already poking their way up through the cold soil. (I literally stand over the asparagus patch every day, monitoring its progress.) In the meantime, my secret wild garlic foraging spot, on an abandoned plot of land up above our house, is already giving us fresh greens. Soon, it’ll be time to start looking for porcini mushrooms in the forest. (Porcini are about the only mushroom I feel confident picking. I could probably identify a Chicken of the Woods at a push, since they’re very distinctive, but I’ve never seen one in real life. I live in hope…)

So we’re not going crazy with new veg this year. But I do want to grow lots of new flowers from seed. Our flower beds were looking a bit scrawny and tired last year (they’ve been neglected over the last couple of years in favour of the rustic greenhouse project and expanding the veg garden). We’ll treat ourselves to some new plants at some point, but for now I’m trying to grow as much from seed as possible (it’s cheaper and more satisfying). New dahlias, foxgloves and snapdragons. Aubretia to (hopefully) drape elegantly over the new stone retaining wall (which hasn’t even been finished yet but I live in hope that this year – this year – we’ll manage to finish one of the many building projects on the go in the garden). Catnip for our furry little friends. Some ornamental grasses. That’s just for starters. I have a whole wodge of seed packets to sow during April. Fingers crossed I can keep all these bloody plants alive.

What about you, are you getting into the gardening swing already? I always feel, every March, that I’m not ready for a new gardening season. That I want a longer winter rest period. That the garden is overwhelming and there’s too much to do to wrestle it back under control after letting it run wild in the previous autumn. Then we get stuck in and I’m instantly obsessed all over again. I even dream about the garden at this time of year. It’s like there aren’t enough waking hours to process the excitement and promise of a new gardening year. (The fatigue and backache and endless bindweed come later. For now, it’s all about dreaming and planning and sowing little seeds. Bliss.)