It’s a tale as old as time (or, more accurately, as old as this blog): I write about the excitement of kicking off the new gardening season and, sure enough, the weather says, ‘Nuh-uh. Here, have some snow. And some frost. Would you like more snow?’

Needless to say, the April weather isn’t exactly playing ball with my Gardening Bore plans. One day it’s sunny and a perfectly appropriate 18°C, the next it’s barely above zero. On Monday, to my great disgust, we woke up to a couple of centimetres of snow. And there’s more snow forecast for this weekend. It seems so improbable when today is such a lovely, warm day. How can it possibly snow this weekend? That’s Bulgarian spring for you. One year we hit 30°C in March; another year we had snow at the end of April. It’s pot luck. 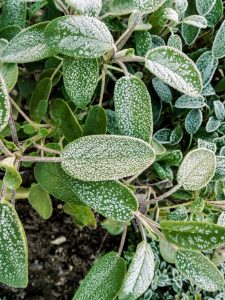 The unpredictable (or predictably unpredictable) weather is why I’m picky about what seeds I sow in March. I only really sow the essential stuff – the stuff that takes a while to get going from seed, like tomatoes, chillies and parsley. With almost everything else – courgettes, squash, other herbs, etc. – I wait until it warms up a bit, often around the middle of April. It’s frustrating, but better to sow seeds a bit late, in my opinion, than have sad, leggy seedlings hanging around the house because it’s too cold for them to go outside. But I’m desperate to sow everything – and to clear our unheated upstairs landing of all the pots that overwinter in the house (our lemon tree, tender flowers, etc.). I’ve lost at least one plant up on the landing thanks to one of our cats pissing in it, like it was a potty. I’ve even caught them in the act, balanced precariously on the edge of the pot and pissing right onto the plant. And it was one of my precious alstroemerias! It’s dead now. Rest in piss.

It is of course a cliché British habit, to talk about the weather so much. And a pointless one at that. (It’s not like I can control the weather. My psychic witch powers don’t stretch that far. Yet.) But I can’t help myself. Given the state of the world right now, talking about the weather feels safely, comfortingly mundane. Like a pair of old slippers. Albeit a pair of slippers that’s soggy and full of snow. Sorry, I’ll stop saying snow now. Snoooow. That’s the last one, I promise. Last one until November.

In other news, the police came to our house this week asking to see our documents (as in, our residency cards). Which was weird. They’ve only done that once before, back in our first winter, when we were still new to the village. The officer said they were calling in on all local foreigners to check they were properly registered – something about Ukrainian refugees starting to arrive in our local town, but who knows what it was really about. As with all official interactions, I just smiled and fumbled my way through it. Still, we had a nice little chat about the garden, the police officer and I. And somehow I managed to not drone on about the weather.

That’s it for this week. I’m off to enjoy the sunshine, while it lasts, and attempt to manifest some stable spring weather with the POWER OF MY IMPRESSIVE MIND. Yes, some people like to use the law of attraction to manifest wealth and status. But me? I just want to sow more seeds and stop my cats pissing in plant pots. Humble, like.