July in the veg garden (a deep dive)

Hello July, you cheeky motherfucker, creeping up on me without warning. I’m sure last time I checked it was still April. Now it’s high summer and the year is running away from me. It’s downhill from here to Christmas. You know that don’t you? Before we know it, it’ll be 2030, President Zuckerberg will be in the White House and our brains will be permanently connected to TikTok via cranial implants.

But for now, let’s revel in July. After a wet May and early June (normal for where we are in the mountains), it’s been hot, hot, hot for weeks. The veg garden has been loving it and our crops are plumper than a Kardashian’s cheekbones. Come with me as I take you on a tour of our grow-your-own efforts. (As always, just click to enlarge the photos.) 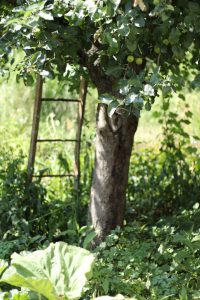 Old favourites and our rotation system

For those who are new here, we grow our veg in ‘raised’ beds. (They’re not really raised – they’re just organised beds with wooden edging and paver pathways in between.)

Some beds are given over to perennial crops: asparagus, rhubarb, blackberries and Mediterranean herbs. A couple of beds are devoted to the same annual crops each year – for example, we have a narrow bed below the trellis archway, where I always plant butternut squash (I train it up over the trellis), and I grow lots of coriander in among that squash. And next to that, I’ve devoted a bed to cut flowers. 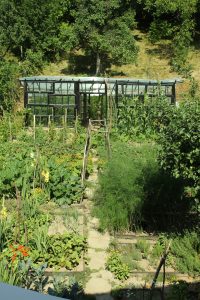 The veg garden from above.

Another six beds are for our rotation system. As we tend to grow many of the same annual veg crops each year, we rotate these across six beds from year to year, to avoid pests and diseases building up. (As in, a bed might have courgettes one year, then brassicas the next.) Our rotation system is:

– Two beds devoted to courgettes. We grow four courgette plants, which is probably too many for just two people, but we love them. It’s hard to think of any other plant that delivers up so much food for such little effort.

– Two beds devoted to brassicas – in our case, kale. We also grew some purple sprouting broccoli last year, but while the plants grew big, they never produced any florets. The bastards. So this year, it’s all about the kale (a lovely variety called Dazzling Blue).

– And two beds devoted to root crops – typically parsnips, beetroots and leeks. This year we’ve skipped parsnips and are trying celeriac instead. So we have lots of leeks, lots of beets, and one row of celeriac. The celeriac seems to be doing well and was pretty easy to grow from seed, so who knows, it could earn a regular place in the veg garden. (The other root crop we grow is potatoes, but these are growing in bags this year – purely because we were running out of space. We’ve also got some random potato plants popping up in the compost heap, and underneath the blackcurrant bushes!) 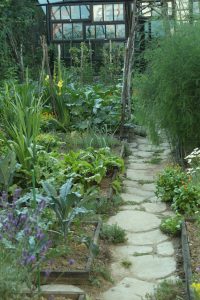 Other crops like parsley, basil, chillies, and garlic that we grow from seed every year get planted wherever there’s space. Usually, we harvest our garlic in June, and then the basil and chilli seedlings get planted straight away in its place. Parsley is in with the kale this year.

This spring we expanded the veg garden and made new beds in front of the greenhouse, which has given us a lot more room to play with. So we *might* have got a bit carried away with new crops this year:

– Most of this new area is devoted to fruit. We already had a lot of strawberry plants, which did amazingly well this summer (they loved all that spring rain), but we’ve now added three blackcurrant bushes, 20 raspberry canes (kindly donated by our neighbour), and another blackberry (because our existing blackberries are prolific but not that tasty). We don’t tend to net our fruit plants – we’ve never had much of a problem with mice or birds eating the strawberries, probably because we have four murderous cats. But now that we have a lot more fruit crops, we’ll just keep an eye on things and net them if we have to.

– Opposite the raspberry beds we have a big square bed that we’ve devoted to a bastardised version of the ‘three sisters’ method: growing corn, squash and beans in the same place. Yes, we’re growing sweetcorn for the first time and I’m already hooked. It’s so easy to grow from seed, has shot up with very little effort from us and seems entirely trouble-free. So unless there’s a major disaster in the next month and we don’t get any cobs for some reason, I think we’ll be growing corn every year. I’ve underplanted the corn with a couple more butternut squash plants – because you can never have too many Big Butt Butternuts – and there are dwarf green beans growing around the edge. So it’s not strictly three sisters (in which the beans grow up the corn stalks), but close enough. Seems to be working well. 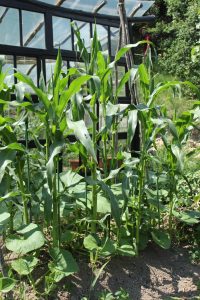 – We’re also growing a few aubergine and red pepper plants – just from seedlings that I bought at the market. We did try to grow aubergines once before, and I seem to recall we managed one plant that offered up two tiny aubergines. But this year’s plants already look better (and we have six plants instead of one), so that bodes well. As for the red peppers, we’ll see. Our neighbour grows them every year and gets a great crop, but our plants look rather small and pitiful.

– And I bought a few cornichon plants at the market. Not that I really had room for them. I’ve squeezed them in at the bottom of the trellis, where they’ll have to fight for survival with a butternut squash and our rampant courgette plants. If they produce anything at all, I will personally give them a medal and a smart pat on the back.

I couldn’t talk about the veg garden without once again bragging about the rustic homemade greenhouse. (Although I kind of miss talking about the wonky polytunnel, which was so very, very wonky by the end of its life.) So far, so good in the greenhouse. I don’t want to jinx it but the tomatoes are very happy and we’ve had hardly any blight so far this year. (We get blight every year, not that it really stops us getting a good crop, but it takes quite a bit of work to keep on top of the blighty leaves.) 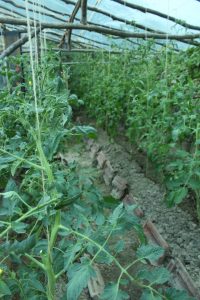 Toms in the greenhouse.

If you’re a gardener, you’ll know that something always goes wrong. Last year my chilli seeds failed to germinate. All of them. This year, it was my butternut squash. They initially grew well from seed, but then the plants got some mysterious ailment that caused all the leaves to curl up, then the plants swiftly died. I’ve no idea why. Anyone who’s been here for a while will know I love my butternut squash harvest – we usually get dozens of squash and I proudly arrange them in descending order of size, like a fucking mad woman. (In fact, my first ever Instagram post was dedicated to this habit.)

Luckily, we had several squash plants germinate in the compost heap, so we’ve planted those out instead. I read that you’re not supposed to grow squash from your own seeds, unless you pollinated the plants yourself by hand (basically, if there are courgettes, cucumbers or anything else similar planted nearby, they can get cross-pollinated, meaning there’s no guarantee that the seeds will produce the same kind of plant next year). So I’ve no idea what kind of Frankenstein squash these plants will produce, but I’m certainly intrigued.

One thing I love about gardening is nothing is ever set in stone. If something doesn’t work, you can try again next year. And you’ll constantly find better ways of doing things.

But I think we’re really hitting a sweet spot with our veg garden. The rotation system works well, the new area in front of the greenhouse gives us much-needed extra space, and the rustic greenhouse is a delight. There’s some wooden edging and pathways to do around the new beds, but that’ll be done this summer. So what’s next after that?

Longer term, I’d like to move the asparagus. Once it finishes cropping every year, asparagus grows huge ferns, which you can’t cut back until they turn yellow (usually October or November). Trouble is these ferns are so giant, they’re kind of spoiling my view of the veg garden! Ideally, they’d be planted towards the back, but we didn’t know our veg garden would expand so much when we first grew the asparagus from seed, eight or nine years ago. Moving a very precious (and rather fussy) crop like asparagus isn’t a decision to take lightly. It would probably mean we couldn’t pick the crop for a couple of years after moving, to let the plants get re-established. The more sensible approach would be to wait a few years, then start growing new asparagus crowns from seed to replace our existing ones as they reach the end of their life –asparagus lives for up to 20 years. But that’s something a patient person would do, and I’m not known for my patience. We’ll see how we feel next year. Rob thinks I’m mad to even consider moving them, and he’s probably right. 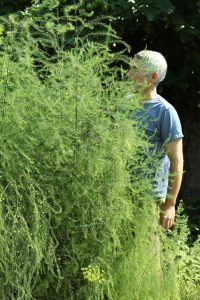 Mostly our future plans concern the rest of the garden. I’d like to build a big wildlife pond in the flower garden, and we want to completely revamp the summer kitchen to make it, well, swisher. And the front garden isn’t a garden at all – just a crappy scrap of land that really doesn’t do the rest of our garden justice. So there’s still plenty to do, even if the veg garden is, dare I say, sort of ‘done’.

What’s going on in your garden this month? And what are your garden plans? I always think planning is half the fun of gardening, but then I’m the sort of nutter who makes recipe spreadsheets. Lists are life to me. Perhaps you’re the sort of gardener who likes to go with the flow, in which case I’m not even sure we can be friends.