Early January. Even though 95% of your body is under the duvet, you can tell it’s going to be cold when you get out. Cold wooden floors, maybe a thin film of ice on the single-pane windows. What little you can see through the window is bleached, the grey and white landscape of a faded photo.

The first thing you do when you get downstairs – ignoring the hungry cats for a few minutes – is to light the woodburner. Then feed the cats. Brew the coffee. And drink said coffee, dragging your chair to sit by the now-whooshing fire. Your weather app says it was -10C out there overnight. You’ve seen worse, but still, it’s always notable when you get down into the minus double figures. It snowed a little more yesterday, so there’s the path to shovel before you bring in another armful of wood and start the day proper.

This is a day for hot porridge and indoor work. Later, after something warm for lunch, you’ll bundle up and go for a walk in the snow, absorbing the day’s ‘highest’ temperature (not that high!) and the last of the daylight. But for now, you’ll relish the comfort of the warm kitchen, surrounded by lazing cats, each competing for the best warm spot.

A typical January morning for us, but not so much in recent years. The snow and cold temperatures seem to arrive later and later each year, and hardly stick around at all. This Tuesday it was 17°C. Plus 17, not minus! We went walking in t-shirts. It was nice and everything, but confusing. More like a May day than a January day.

When is the snow coming? We had a couple of teaser snows in late November and early December, as we always do, then it typically warms up again for Christmas. (At least, that’s the pattern in our part of Bulgaria.) But there always used to be snow by New Year, Rob’s birthday (early Jan) at the latest. This year it looks like it’ll arrive later, as it did last year and (I think) the year before that. And the forecasted temperatures for the next week? Comfortably above zero during the day, barely dipping below zero on a couple of nights. 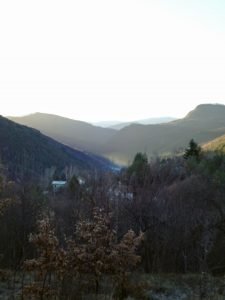 Where is the snow?

Come on, winter. You can do better than this. I love the snow. I enjoy a good, sharp winter with below-freezing temperatures. It’s good for me, and for the garden. But that’s not why I’m worried. I’m worried this is an ongoing pattern of shorter, warmer winters. ‘Duh,’ you’re probably saying, ‘climate change, innit?’ And you’re right. I just didn’t expect to see such tangible changes in the decade we’ve been here. What will winters be like in another 10 years’ time? Will we even have a village river if there’s hardly any snow melting each spring? The river is already so low…

‘Worried’ is probably the wrong word. It’s not like we’re going to sell up and move somewhere with more snow. I’m not that bothered. I’m just … I don’t know, noticing it more each year.

Anyway, the forecast says we might get some snow next week. I hope so. I’m keen to tug on my boots and go for those snowy walks. I crave those quiet, still mornings after fresh snowfall, when our only priority is to get warm. Bring on the snow, please, power cuts and all.

Consider this my verbal equivalent of a rain dance. Since whenever I mention the weather on here, it without fail changes instantly. Like that time I said how weird it was that we weren’t getting our usual summer storms – then we had epic storms. Or those times I rejoiced that spring was here only to be hit with a late snow shower. I’ve typed the words. Now we wait…