How to survive January

How’s January treating you so far? I was livid – actually livid – to see that other parts of Bulgaria had a lovely sprinkling of snow in the past week, while our area is still a sea of brown. Brown trees, brown fields, brown roofs. So although we always ease into January and treat it as a month-long exercise in *cosy vibes*, and this year is no different, I must admit I’ve been struggling with the general brownness of everything. And the fact that it’s so mild we barely need to put the woodburner on most days. It’s all messing with my typical January mission of living in an Instagram photo, complete with snow, a roaring fire, oversized jumpers, chunky scarves and so on.

My point is, I thought we could all do with a January pick-me-up. Yes, the month is almost over, but since this was the week of Blue Monday – the third Monday in January, and reportedly the most depressing day of the year – I thought some survival tips might be in order.

Here’s how I stay sane in January:

Embrace the dark mornings with candles and lamps instead of harsh overhead lighting. We started drinking our morning coffee by candlelight a couple of winters ago and it’s a game-changer.

Plan the garden. One of the perks of winter is it’s a break from gardening. A time to rest (for me and the garden) and to look forward to the next gardening season. Late January is usually when I start planning what will go in each of the veg beds, ready to start sowing seeds in February. (We don’t sow much in February, usually just tomatoes and parsley, but it’s a mood-boosting start.) Even if you don’t have much space and time to garden, go and buy some seeds for easy things you can grow from scratch. It’ll have you feeling like spring is just around the corner. Which it is.

Eat more fibre. When it comes to nutrition and ‘diets’, all I ever see is people droning on about protein and carbs. Boring! Why isn’t everyone obsessed with fibre? Most of us don’t eat enough of the stuff and it’s essential for a healthy gut microbiome. Plus, obsessing about fibre means you get to talk about poo a lot, which is always fun. As a pair of plant-munching vegans, we do alright on the fibre front, but there’s always room for improvement, especially when it comes to eating a diverse range of fibre-rich foods. Have you seen the research that says we should be aiming to eat 30 different plants a week? It’s not as hard as it sounds. Nuts, seeds, spices, herbs and grains all count towards your total (anything derived from plants counts), so most weeks we can make it to 30 without breaking too much of a sweat. Anyway, I find it a useful measure to aim for.

Get outside every day. This one’s a no-brainer. Just get out for a walk each day, no matter how brief.

Lift some weights. I used to do yoga several times a week but in 2022 I started focusing more on strength training, with the help of some simple dumbbell workouts on YouTube. (It finally dawned on me that I’m such a weakling, and if I get much weaker, I’m barely going to be able to lift my own head up when I’m an old lady.) Much to my surprise and delight, I LOVE working out with weights. You can really see and feel the results. Get yourself some dumbbells, guys. Let’s get ripped together, yeah? (She said, collapsing into a fit of laughter.)

Watch something warm. We just watched both seasons of The White Lotus (season one set in Hawaii and season two set in Sicily) and it’s as good as everyone says. I can’t decide whether watching beautiful, rich arseholes holiday somewhere stunning and warm is masochistic or not, but I’ve been loving it.

Cook something new. January is a time for slow living. And nothing says slow living to me than cooking wonderful food. I invariably ask for cookbooks for Christmas, which means I have lots of new recipes to try in January, and it’s a good way of keeping me entertained, interested and happily full. Even if you don’t love cooking, you have to eat, so why not eat some new stuff? I got the new Ottolenghi Test Kitchen cookbook for Christmas, plus Home Food by Olia Hercules, and Nistisima by Georgina Hayden. I recommend them all. (Only the latter is a vegan book, but the others feature a lot of plant-forward recipes.) Don’t want to splash out on a book? I find The Guardian is a bottomless pit of interesting recipes. 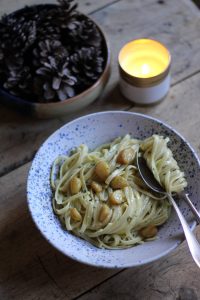 This confit garlic pasta (from Home Food by Olia Hercules) was pretty epic.

Well, that’s how I’m spending my time this January, and distracting myself from the never-ending brown outside. (We might – fingers crossed – be in for some snow next week, but I feel like the weather forecast is just gaslighting me at the moment, so…)

How about you chaps? How are you staying sane this winter? Do you secretly love January as an excuse to just hunker down and pretend you’re a hibernating bear?