If you’re anything like me, you start thinking about Christmas food in, oh I don’t know, September. By November you’re bookmarking more recipes than you could ever cook or bake in the one-week period that is Christmas. And by now, a week or so before C-Day, you’re up to your eyeballs in lists. There’s the big supermarket shopping list. The food list for those smaller, independent shops. The list of things to make and freeze ahead (for me, bagels for Christmas morning, and an enriched walnut and chocolate bread for Boxing Day breakfast). You may even have a list of steps and timings to cook your Christmas dinner to perfection (I used to do this, but I gave up when I finally realised that, after one glass of bubbly on Christmas morning, the list always went out the window).

Even if you’re nothing like me and the above paragraph made you feel panicky or sorry for my mental state, I bet you care about Christmas food. From the first joyous mince pie of the year to how soon to open the tub of Quality Street, food – for most of us – is synonymous with Christmas.

So when someone – and by someone, I mean a vegan or vegetarian – comes along and threatens your Christmas food plans, all is not calm and bright. What on earth are you going to feed them? What do they even eat at Christmas? Like a slightly scary Christmas fairy (picture the testicle-punching fairy from Scrooged), I’m here to blow some glitter-encrusted inspiration at your eyeballs. (Ew.)

Let me start by stating the bleeding obvious: we vegans can already eat most of a traditional roast dinner. Give me a plate of roast potatoes (the best bit of any roast), maple roasted parsnips, carrot and swede mash, slow-cooked cabbage, with my own little jug of veggie gravy and I’m in heaven (you can buy veggie gravy granules if you don’t want to attempt it from scratch). No need to do any special meat alternative on my account. But if you do happen to bung some veggie sausages or plant balls on the side, I’ll love you forever.

It’s as easy as that to feed a vegetarian or vegan on Christmas Day. When I’m visiting home and my mum cooks a roast dinner for the family, that’s what she does for me – all the usual spuds and vegetables, my own jug of veggie gravy and some veggie sausages or plant balls. (That said, you may need to tweak how you cook the meal, like roasting potatoes in oil instead of goose fat, and using margarine or dairy-free butter in any mashed vegetables.)

But if you do want to push the boat out and make a special dish for your plant-munching loved one, I recommend one of the following: 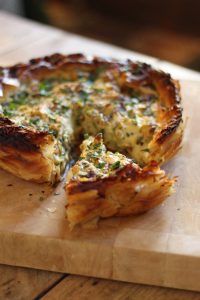 I’m realising now that all of these suggestions are for things-in-pastry. But I make no apologies because pastry is Christmas. Christmas is pastry. And I’ll fight anyone who says otherwise.

Every year my mum used to buy me an apple and cider Christmas pudding from Georgie Porgie’s Puddings, purveyors of possibly the world’s best Christmas puddings. And then I went vegan and … she still buys it for me every year because it’s accidentally (or maybe on purpose) vegan. (I transport the pudding back to Bulgaria in my suitcase, carefully wrapped like the precious cargo it is.) The moral of the story is some puddings will be vegan anyway, so if you normally buy a Christmas pudding, just shop around to find one that your guests can eat.

I’ve also found that some normal supermarket mince pies (not the free-from ones, although they’re fine too) are accidentally vegan. Basically, we’re talking cheapo mince pies without ‘all-butter’ pastry. They may not be explicitly labelled as vegan, so do check the ingredients – milk, butter and eggs are allergens so they’ll be listed in bold, which makes your life easy. Personally, I’m fine with cheapo mince pies, although, as I say, the ‘free-from’ deliberately vegan ones are also good. I’ve never met a mince pie I didn’t like.

For the cream alternative, there are plenty of decent dairy-free creams and ice creams, but I like coconut cream myself. Just a few spoonfuls from the top of a can of coconut milk that’s been chilled in the fridge. Heaven.

And if you want to make a dessert, may I recommend a very working class and not-at-all-fancy trifle? It’s surprisingly easy to veganise, and so generous and delicious, it’ll feed the whole family. You need a bog-standard vegan sponge cake for the base layer (hit me up if you want to know which recipe I use), some jarred fruit (cherries, raspberries, or strawberries) and a slosh of alcohol over the cake, vegetarian jelly (always jelly in my trifle), powdered custard made with oat or soya milk, then coconut cream (again, from a chilled can of coconut milk) as the topping. Finish with some toasted flaked almonds or finely slithered dark chocolate. Sure, I could make a fancier trifle, but Rob wouldn’t let me even if I wanted to. This is the trifle he demands each Christmas. He has, on occasion, demanded it again for his birthday in January.

I’ve also got my eye on some other dessert recipes to try over the Christmas period. I’ve not made them yet, so this isn’t exactly a recommendation, but they certainly look tempting and have been on my Vegan Radar (Vadar?) for a while:

While I’m at it, shout out for the Happy Pear vegan banoffee pie recipe, which is nothing to do with Christmas but I’ve made it multiple times and it’s divine. (Full disclosure, though, I replace the healthier cashews in the base layer with a packet of Biscoff biscuits, because I’m filthy.)

My gift to you: How to make vegan sausage rolls

Homemade sausage rolls are the highlight of my Christmas snacking regime. The. Highlight. We make them slightly different each year, so this isn’t a recipe as such, but it’s easy to follow and you can adapt as much as you like:

*To make a vegan egg wash, just fill a little glass with oat or soya milk, add a tiny sprinkle of turmeric (just enough for a slight colour), and a splash of maple syrup. Brush this on and it’ll give your sausage rolls a lovely golden finish.

I hope this helps you feed your designated vegan or vegetarian this Christmas. And if you’re that vegan or vegetarian at the Christmas table, why not make one of the above to contribute to the meal? That’s what we did last Marchmas (Christmas in March, with Rob’s folks) – we made the cauliflower cheese filo pie as our vegan centrepiece, and it was big enough for everyone to have a wedge. And they did. Sharing is caring, and all that. Or is it caring is sharing? Anyway, merry feasting to all and to all a good feast.