134. Return of the wonky polytunnel and a summer kitchen teaser

Lordy, where is April going? We’ve both been working such long days, there hasn’t been much time to update the blog. But here’s a brief whizz through what’s been occurring of late. 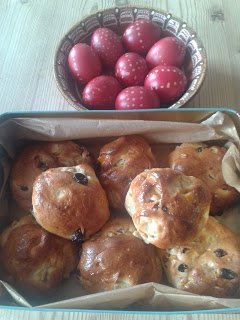 We made the usual dyed eggs and hot cross buns for Easter Sunday. (Although my buns, as you can see, were minus the cross, partly because I am #secular, but mainly because I am #lazy.) As always, we played what we call the ‘egg-knocking game’ – Bulgarians call it Borak – with the neighbours, where one person knocks their dyed egg on another person’s egg to see which one breaks. The person with the uncracked egg progresses to the next exciting round where they get to … fight another egg. The winner, the person with the last egg standing, is supposed to have good luck for the rest of the year. 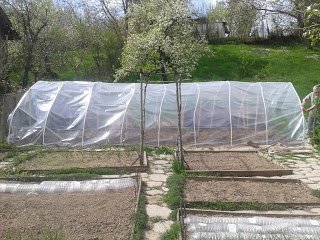 In what is one of the most exciting events of the spring (I’m not even joking), the polytunnel has gone up. Because we only cover our polytunnel in cheap DIY store plastic, it never survives a whole Bulgarian winter. So we take the plastic off every autumn, leaving the central heating pipe hoops standing like a ribcage, and put fresh plastic back on in the spring. In a month’s time, it’ll be planted up with our tomato plants but, for now, it’s protecting all our little seedlings, everything that was previously living in the bedroom, from the snail army that invades the garden every night.

Speaking of armies, we were talking about the threat of nuclear war the other night (as you do), and the best response I could muster – because my brain is unable to process any more global shit-flinging – was, ‘Ugh, we can’t have nuclear war right now, we’ve just got the polytunnel up.’ I bet no one said that during the Cuban Missile Crisis.

The weather has been evil to us this week. In the six days the poor cheapo wonky polytunnel has been up, it’s had to contend with heavy rain, wind, one hailstorm, and even snow. Wednesday the wind was so bad it yanked the polytunnel plastic completely out of the ground on one side, where it had been buried a foot deep in the earth. We woke up to bare hoops and all the plastic puddled on one side, like a big pair of see-through knickers. Amazingly, all the seedlings inside were unharmed, and the plastic wasn’t even ripped, so Rob quickly got it back to normal. It’s snowing again now as I write. I really hope our guests arriving tomorrow from the UK aren’t expecting a beautiful Bulgarian spring! 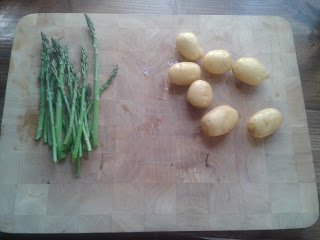 On to happier news, and the asparagus bed is merrily providing us with a couple of meals a week. In fact, we’ve been picking as many as 30 spears in one go. It was definitely worth the epic wait to get to this point and I’m still feeling pretty smug about the whole thing.

And finally, the summer kitchen is coming along nicely. We’re not ready to do a full reveal yet, so here’s a teaser shot… 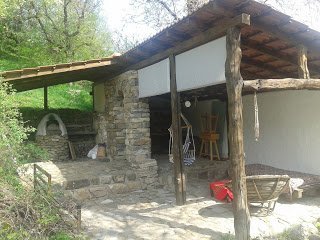