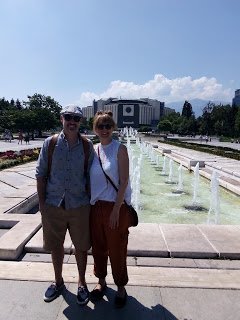 It’s no secret how much I love Sofia. Every time I see one of those ‘Top 10 cheap European city breaks’ articles that the Guardian publishes every other week, I always scan through thinking this time, surely this time, they’ll include Sofia. But they never do. So I decided to do my own.

I realise most of these recommendations focus on eating and drinking (because I’m a greedy goose, gobble gobble). But, in my mind, it’s not a good city break without a hefty amount of eating, drinking and watching the foreign world go by. And, whenever I go to a new city, I’m always after trustworthy tips for nice places to eat and drink – as opposed to info on sightseeing stuff, which is available anywhere.

Tea, coffee and cake
Set in a pretty courtyard, Villa Rosiche (Neofit Rilski Street) does an amazing selection of cakes – and, joy of joys, these ones actually taste delicious. Nice coffee, friendly service, and lots of locals. Boom. *Drops mic*

Fabrika Daga (which translates as Rainbow Factory) on Veslets Street does great coffee and sandwiches. They also serve a very nice cooked breakfast (hard to find in Sofia), complete with eggs and bacon.

The Tea House (Georgi Benkovski Street) has a huge selection of tea blends. They serve booze as well and sometimes have live music on in the evenings. If there’s one downside to this place, it’s the erratic opening hours – as far as I can tell, they’re open very little in the summer. But, when they are open, you won’t be disappointed.

Boozy times
Halbite (‘The Beer Mug’) does a brilliant selection of international ales. We always go to the one on Neofit Rilski Street, which has a small courtyard beer garden that’s permanently overrun with cats and kittens. Beer and kittens. It’s like dying and going to heaven.

Bar Me is a small place with a cosy back room and decent cocktail menu. It’s on Tsar Osvoboditel Boulevard, close to the Russian Church and around the corner from the Aleksander Nevski Cathedral, so you’ll definitely be in the area.

The Ale House cellar bar on Hristo Belchev Street brews its own live beer and, best of all, there are taps at the tables for you to pour your own beer. I repeat, pour your own beer. You just pay by the litre at the end. I’m sure you don’t need me to tell you how awesome that is. We’ve found they can get a bit sniffy about just having beer and no food, so I’d go when it’s quieter, late afternoon or something. Order a portion of chips if you have to.

Hambara. I almost don’t want to tell you about this bar, that’s how much I like it. I think it’s probably Sofia’s coolest bar. It’s hard to find (you’ll feel like you’re walking down a dark alley towards someone’s shed), so follow the instructions on Spotted by Locals … it’s worth it.

The Cocktail Bar is set in a little square at the corner of Angel Kanchev Street and Solunska Street. It’s a round glass building, with lots of outdoor seating in the square, so it’s perfect for watching the world go by before or after dinner. The cocktails (served after 6pm) are divine. I recommend the Sofia Mule.

Food in your belly
Made in Home on Angel Kanchev Street does brilliant food and delicious cake, in very cutesy surroundings (think decoupaged tables and the like). It’d be my first choice for lunch and I wouldn’t mind going back there for dinner either. Their new restaurant, Made in Blue, is also supposed to be excellent.

For cheap, decent Bulgarian food (and Bulgarian wine by the litre), you can’t go wrong with Divaka. It’s a chain, and very popular. We like the one on Hristo Belchev Street best. I think the meat stuff is pretty basic – meatballs, kebabs, etc. which I always steer clear of. Instead, I’d order several smaller plates, like salads, bread and dips, courgette fritters, stuffed peppers, that sort of thing. And did I mention they do wine by the litre?

Before and After is just a few doors down from Divaka, on Hristo Belchev Street. This is a gorgeous room with a fountain in the middle. Good food, lovely atmosphere and they do tango dancing on Sunday evenings!

Boom! on Karnigradska Street does the best burgers ever. Okay, it may feel wrong to come to Sofia and eat burgers, but who cares? While you’re at it, you may as well get a filthy Oreo milkshake. Go on, you’re on holiday…

Sightseeing
I’m not going to say much about sightseeing because I’m not Lonely Planet. But, in between all that eating and drinking, you should probably check out the following:

Shopping
Head to the Women’s Market for gifts, trinkets, vegetables and, possibly, pickpocketing. And Tsar Shishman Street has lots of nice trinket-type shops on it, including our friend’s Elephant Bookstore.

But possibly one of my favourite things to do in Sofia is trawl the second-hand clothes shops, searching for weird and wonderful clothes. I’ve had some amazing finds in these shops over the years, including a tropical print, wide-leg jumpsuit that I bust out every year on holiday, and more hipster vintage jumpers than I can shake a stick at. So, if ever you see a clothes shop with the sign ‘втора употреба’ (second hand), be sure to go in and have a rummage.