122. How to eat out in Bulgaria (and get more than chips and shopska salad) 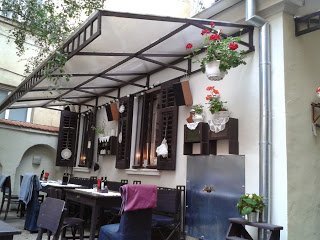 Yes, it’s snowing again here in Bulgaria, and we’ve reached that point where the snow is no longer pretty white fluffy stuff, but big clumps of brown icy shite. But, let’s ignore that for now and focus on a happier topic: food.

Over the years, I’ve had a few people say they’ve been to Bulgaria and found the food to be really basic and the whole eating out experience to be a bit, well, weird. One poor soul said they lived on nothing but shopska salad (a traditional salad found everywhere) and cheesy chips for days. Come to think of it, even Bulgarians eat A LOT of shopska salad and cheesy chips. But the quality of produce here is outstanding, and there’s way more to Bulgarian food than shopska and chips.

Clearly, in Sofia you can get whatever kind of food you want, in gorgeous restaurants, usually with excellent service and comforting English menus. You can even get a KFC if you want. Rock out. But, if you’re heading outside central Sofia, or if you’re after a more authentic Bulgarian meal, you might find the following helpful…

In Britain, we tend to order starters and main courses for everyone all at the same time. But it seems to freak out Bulgarian waiters when we order loads of stuff in one go. Besides, food here is brought to the table whenever it’s ready, in seemingly random order, so the concept of starters-then-mains rarely works out the way you plan. You might think you’re ordering soup and bread as a starter and a meat dish as a main course, but what you’ll actually get is soup and meat arriving together, followed by the bread about 20 minutes later.

Instead, start by ordering small things only (like bread, dips, salads, soups) – you know, the kinds of things you want to eat first. Then, when you’ve eaten those and you’re ready for more food, order more. Keep going like that until you have to undo the top button on your trousers. Roll home.

Even when ordering bit by bit, prepare yourself for the fact that not everything will come at the same time. So, if your plate of food arrives first, yell ‘screw you losers’ to your companions and tuck in. Or, slightly more polite, you can share your plate with everyone and reap the rewards when their food comes.

‘Nyama’, without doubt the worst word in the Bulgarian language

It’s not uncommon to be presented with a huge menu only to find that most of what’s listed isn’t available, in which case, you’ll be told ‘nyama’ (‘there isn’t’). If I had a lev for every time someone in a restaurant has told me nyama, I’d be … well, not a millionaire, but definitely about 500 leva richer. Therefore, it’s always a good idea to have a backup choice in mind. And a backup for your backup.

Even dreaded picture menus can be unreliable. One time, in a restaurant in Etropole, there was a lovely picture of a salad on the menu but I couldn’t work out from the list which salad it was. When I asked the waitress where I could find this beautiful salad, she replied (without any trace of shame) ‘oh no, we don’t have that, it’s just a picture from the internet’.

Service with a smile … maybe

I’ve written before about how Bulgarians are the friendliest people you’ll ever meet, once you get to know them, but the customer service here is, at times, indifferent bordering on rude (to a Brit, anyway). It’s not an intentionally rude thing – your waiter doesn’t hate you and want you to have a shit time/die – it’s just that smiley, fawning service isn’t really a thing here. (I’m excluding Sofia, where you can expect normal levels of hospitality.)

Go for dinner at a Bulgarian’s house, however, and it’s a completely different story; your hosts will bend over backwards to make sure you’re comfortable and happy. But in a local restaurant? Not so much. Saying that, I’ve noticed a huge change in the five years we’ve been here. Maybe it’s because, as our language skills have improved, we’ve got easier to deal with. Or maybe Bulgaria is becoming less … Bulgarian. Anyway, don’t be upset if you’re greeted with an ‘I don’t care if you eat here or not’ shrug instead of a smile.

Smoke gets in your eyes

In theory, there’s a smoking ban in Bulgaria, same as the rest of the EU. In reality, once you venture outside central Sofia, few local bars, cafés and restaurants observe it. Therefore, expect to come away from a civilised meal smelling like a British pub circa 2001. As a militant ex-smoker (yes, I’m one of those), I find it gross, and I’ve walked into plenty of places only to immediately walk back out again. Not much to say about this except you’ll have better luck in Sofia restaurants. And it’s only really a problem in winter when eating outside isn’t an option.

Now, the good stuff … what to order

Sorry about my sporadic translations and clumsy, kind-of-phonetic English spellings, but they’re probably more helpful than writing in Cyrillic.

We like to get a few dips and bread for everyone to share. Go for ‘parlenka’ (flat bread) or ‘pitka’ (usually a homemade roll), as opposed to ‘hlyab’, which is just processed sliced white bread. Good dips to go for are ‘snezhanka’ (literally Snow White, which is just like tzatziki or cajik, but with dill instead of mint), ‘katuk’ (yogurt, cheese and roasted peppers), ‘kyopolou’ (aubergine, tomato and garlic), or ‘lutenitsa’ (spicy red pepper).

Joking aside, you really can’t go wrong with a good ‘shopska salata’ in the height of summer: diced Bulgarian tomatoes (best tomatoes in the world), cucumbers, peppers and onion, smothered in a generous pile of ‘cirene’ (Bulgarian feta cheese). I also like a ‘morkov and zele’ (carrot and cabbage) salad drenched in vinegar. A ‘vitamin’ salad usually means carrots, beetroot and seeds, or other things that are Good For You.

Cheesy things are a big deal, including baked cirene cheese served with either jam or honey and walnuts. I also love, even though it’s a bit dirty, fried cheese: either ‘cirene’ or ‘kashkaval’ (Bulgarian yellow cheese) battered or breadcrumbed and shallow fried. ‘Burek’ (roasted pepper stuffed with cheese, then battered and fried) is another dirty winner.

If you ever see ‘sarmi’ on the menu, order it and thank me later. It means parcels of cabbage leaves stuffed with either rice or meat (sometimes both) and cooked in a milky or tomato sauce … one of my all-time favourites. Sometimes stuffed vine leaves are also called ‘sarmi’, other times they’re called ‘dolmades’. Either way, still delicious.

You’ll find the usual selection of chicken or vegetable soup on almost any menu, but I like ‘bob chorba’, a thick bean, herb and vegetable soup/stew. (Yes, ‘bob’ means ‘bean’ in Bulgarian. Be sure to tell all your friends named Bob.) Avoid ‘shkembe’ (tripe soup) – Bulgarians love it and it’s supposed to be great for hangovers, but I’d rather languish in hangover hell than eat even a spoonful of that stuff.

Most Bulgarians really dig ‘kebapche’ (a bit like a shish kebab but made from pork mince) or ‘kyofte’ (pork meatballs), so both are cheap and available in pretty much every restaurant. Personally, I don’t like either – they usually have a strong cumin flavour that, to me, just tastes like bad, bad meat. The same goes for ‘lukanka’ (cured flat sausage). But seven million Bulgarians would disagree with me.

Meat dishes usually mean something involving pork (‘svinsko’), or maybe chicken (‘pileh’). At our local restaurants, it’s unusual to see much beef or lamb on the menu. So, working on the basis that you’re faced with a choice of pork, pork or pork, I’d go for ‘svinsko sus zele’ (delicious slow-cooked pork and cabbage) or any kind of barbecued pork (barbecue is the same word in Bulgarian but with more emphasis on the ‘cue’). Or you could go for a ‘gyuvetch’, which is a stew with meat and veg baked in a clay pot. Or moussaka, but keep in mind that it might be made with pork mince and it might not have aubergines in (depending on the season).

Yes, ‘purzheni kartofi sus cirene’, the famous cheesy chips, are the norm, but I much prefer ‘podlucheni kartofi’ (sautéed potatoes with garlic and dill). You can, of course, order your chips without cheese, but your waiter will think you’re a silly fool.

I don’t eat it and I know few words for fish. But, if you’re near the coast or a river, fresh fish is always a good bet. Sofians are also really into sushi and it seems like there’s a sushi bar opening up on every corner, which I find weird given Sofia’s distinct lack of proximity to water. Our neighbour makes a dish with carp and giant beans cooked in tomato sauce, if that helps. I’m afraid that’s about as much as I can say about fish. Sorry, thanks, sorry.

I think Bulgarians have an odd relationship with sweet food. They have bakeries selling the most incredible looking cakes and biscuits, but they quite often taste of absolutely nothing. Give me an ugly but delicious homemade cake any day. So, if you see ‘domashna torta’ (homemade cake) on a menu, go for it. Otherwise, I’d probably stick to a bowl of thick Bulgarian yogurt (‘tsedeno mlyako’), which is amazing and comes served with either jam or honey and walnuts.

Wash this lot down with a few insanely cheap beers or some tasty Bulgarian wine and you’ve got yourself a cracking night out. You’re welcome.

Now, if you don’t mind, I’m off to daydream about sunny days and fat, pink Bulgarian tomatoes – which is not weird at all.