Hello! Yes, we’re still here and haven’t been swallowed by a sinkhole (literally my worst fear). We had friends come to stay, then we went back to the UK for a week, then I had lots of work to catch up on. That sentence pretty much sums up what’s been happening over the past few weeks, but, as that makes for an insultingly short blog post, I’ll try to beef things up a bit.

Our poor friends arrived to light snow and freezing cold temperatures, but they were good sports about it all. The first day, we went for a walk around the village (with me saying ‘fuck, fuck, fuck’ every five minutes at how cold it was – and I live here), before retreating to the warm house. Then we had a much milder day, so we went to Teteven waterfall, which was HUGE thanks to all the rainfall and melting snow. It turns out it’s actually two waterfalls in one place, which we didn’t know. The last time we went, there was only a light trickle. 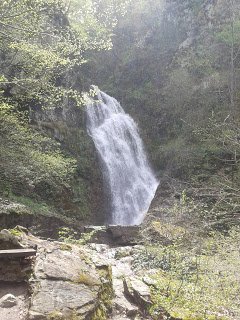 Then we went to Sofia, where we did a FOUR-HOUR communist walking tour, and it was brilliant. I mean, it was freezing and the wind was evil, but somehow it all felt very appropriate for the tour. (Talking about the secret police, beatings, Chernobyl, etc. would feel a little odd in beautiful sunshine.) Honestly, it was amazing, and you should definitely go. Don’t be put off by the length – I don’t think it’s always four hours, we ran over slightly, but every minute was fascinating. You don’t even walk that far really. It’s more standing around listening than trekking for miles. I’m not really selling it, am I? Just go. You’ll love it.

In other Sofia news, we stayed in the hotel with the erotic artwork for the second time. Below is the offering that held pride of place on the wall of our room. And, as we discovered this time, the hotel rents rooms by the hour. Look, I’m not saying it’s definitely a sex hotel. Just … maybe. Anyway, it’s cheap and clean and I’d still stay there again. I’m planning to work my way through every room and collect every picture! (I am legendarily unfussy (and tight) when it comes to hotels. So long as it’s got a private bathroom, I’ll put up with all manner of noises, strange smells, dated furniture, whatever. I once forced Rob to stay in what was effectively half a wooden shed, with the other half occupied by a guy whose idea of a holiday was all-night drinking binges and 5am vomit-fests. Class.)

Ahem, back to the weather. So, yeah, it’s been a bit nippy this spring. We’ve had some lovely warm days, but they’re always followed by a week of cold, wind and rain, and it feels like spring just hasn’t even got started yet. It’s playing havoc with the garden, too, which brings me to…

We had a tomato disaster. For the first time ever, almost all of our seedlings failed. We’re not sure why – they just suddenly turned white and shrivelled. All of our other seedlings have been fine, so it’s a bit of a mystery. We were gutted for about five minutes, before we realised we can easily buy new (bigger, much healthier) plants from the market. So that’s what we did. And at 40 stotinki, or 20p, per plant (that’s for the regular Bulgarian reds and pinks – specialist ones were a bit more), we’re not sure why we’ve been arsing around raising our own seedlings all these years. Depending on how these plants do, next year we might just raise our more unusual varieties ourselves from seed (I do love my Latah early toms), then buy in the main crop of tomato plants. Plus, our friends and neighbours have donated some spare plants, so we’ve now got more than we can possibly use. Standard.

We enjoyed our asparagus for a good month or six weeks, then they started to turn into ferns while we were in England. At this stage, you just leave them as big ferns (they get more ferny than in the picture below), then cut them down in late autumn after they’ve turned yellow. Still smug about it.

Our other seedlings are doing fine, if a little small. Because it’s been so cold, we’ve not planted much out yet and the polytunnel is full to bursting with the usual tomatoes, basil and chillies, as well as a million pots just waiting for their time in the sunshine.

Ah, my darling homeland and its incessant elections. (Seriously, we’re starting to rival Bulgaria for the number of elections/referendums we have – and the Bulgarian government resigns pretty much every month.) What news do I bring from home? Well, there’s an election coming (obviously). Peter Kay’s Car Share was pretty good. And Brighton Pier on a bank holiday Monday was one of the most nightmarish things I’ve ever seen. And it was cold. But, you know, family and friends. If only they’d all move over here…

Still, I very much enjoyed overhearing this gem on the bus: ‘Ah, that’s good. I feels less of a c*nt now.’ #Portsmouth #heartwarming