I have a habit of adopting trends several years after everyone else. It’s like an in-built aversion to doing anything popular at the time that it’s popular. For some reason, I wait until the popular thing has eventually tipped over into cliché and everyone’s thoroughly bored of it. Then I adopt it with gusto.

And so, naturally, I’ve discovered sourdough baking. Almost two years after the rest of the pandemic world. Sourdough should be flattered; it took me 15 years to get around to watching The Sopranos.

To be honest, I’m not entirely new to sourdough. We first made sourdough about five years ago, but quickly got bored of it. All that daily discarding of starter mixture and feeding with flour just felt so wasteful. And our bread didn’t even taste that good.

But I recently saw Shaye Elliott on YouTube talking about her dry sourdough starter, which she keeps in the fridge and only feeds once every week or two (basically whenever she gets down to the last tiny blob of it). The idea intrigued. So I followed her instructions to make the starter, created a lovely, active, yoghurty-smelling beast, and started baking bread.

And that’s when sourdough started kicking my arse. Because it turns out there are just SO MANY WAYS you can fuck up sourdough bread. There are too many variables – types of flour, hydration level, temperature, rising time, baking method… So when your loaf comes out looking nothing like the puffed up holey beauties out there on the internet, it’s really hard to tell which one of the variables you got wrong. It’s nothing like baking with regular baker’s yeast, where you follow a recipe to the letter and you get perfect, easily repeatable bread. With sourdough, you can follow a recipe to the letter and get … whatever the hell your sourdough feels like turning into that day. It doesn’t help that our kitchen is either toasty hot or pretty cold, depending on whether the fire’s on, and we bake in a woodburning stove. (You’ve got more chance of winning Squid Game than maintaining a steady and accurate temperature in a woodburning stove for an hour.) 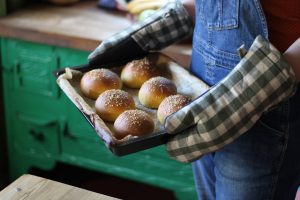 Not sourdough. Just a picture of some recent sweet potato burger buns to prove that I CAN bake bread with packet yeast.

It’s slowly getting better and easier. But I’m still turning out crap loaves every one in three attempts. And I haven’t made a single loaf that’s attractive enough to photograph – which, considering my proclivity for posting everything I eat on Instagram, means it must be bad.

On the plus side, the bread is goddam delicious. Every time. Even those loaves that haven’t risen properly, or are a bit dense inside, or have too many holes, or too few holes. They still taste great. Which is a big improvement on our previous sourdough experience years ago. I just wasn’t prepared for the massive learning curve, especially considering I’ve been baking (regular) bread for over a decade. I’m a Leo, which means I expect everyone and everything to bend to my iron will, and that includes sourdough. I don’t take failure very well. And the early weeks of sourdough baking generally involve a fair bit of failure (or, at least, not roaring success).

A few things I’ve learned that make a big difference to sourdough baking (I offer these up not as some sort of sourdough expert, just as someone who’s on a – sometimes painful – sourdough journey who has discovered some useful tricks along the way):

I won’t go into flour and water measurements, timings and oven temperatures because we’re still perfecting all that, and we bake in a woodburner anyway. But if you fancy giving sourdough a try – you absolute sadist – I recommend watching Shaye Elliott’s fairly recent sourdough Q&A video, and the many Pro Home Cooks videos about sourdough on YouTube. (God, what did we ever do before YouTube? Rob renovated our entire house based on YouTube videos…)

Anyway, I’m off to cry into my Dutch oven over yet another lacklustre (but at least tasty) loaf of sourdough.

What are you up to this January? 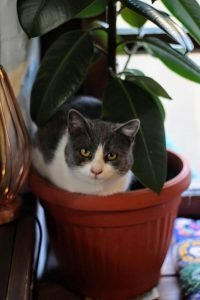 Mim’s face pretty much sums up how I feel every time sourdough kicks my arse.