If you haven’t yet seen the Perseid meteor shower this August, you might have already missed out. It peaked across the evenings of the 11th and 12th. (But you might still catch some tonight, the 13th.)

It’s become an annual ritual for us, to stay up and watch for shooting stars, ever since we first saw them on a trip to Melnik. The night skies are lovely and dark in rural Bulgaria, so we can usually spot quite a few, if the moon isn’t too bright. (Meteor shower or no, the night skies are stunning out here in the sticks. So many stars. Sometimes we can see the Milky Way.)

Last night’s display was a good one and I spotted my first meteor – a big one with a long tail of light – within a few minutes of laying down. (We always blow up our airbed and put it in the middle of the garden with pillows and blankets, so we can watch the annual meteor shower in comfort. Highly recommended.) Plenty more shootings stars followed, and they were still going when we finally came back into the house at 5.15am. It’s been so hot lately, we decided to spend the whole night out in the garden. I’d love to say we stayed awake all night and saw hundreds of shooting stars, but no. I was fast asleep within an hour! The bed was surprisingly comfortable, and it was wonderfully chilly overnight (a welcome relief from the heat of the day), so I couldn’t stop myself dropping off. Although I did wake up every time a leaf rustled in the garden (which was often) and had weird dreams about sleeping outside. I was also convinced we’d be trampled by cows in our sleep – a couple of naughty cows keep sneaking into the top of our garden at night. So it wasn’t the most restful few hours’ sleep, but it was still nice to feel cool for once and get away from our boiling bedroom (which is hitting 28°C most nights).

With that, let’s turn to every self-respecting English person’s favourite pastime. Let’s discuss the weather. If it wasn’t already obvious, it’s been hot for all of July and August. And I mean hot – regularly hitting 35°C, which is fairly extreme for our mountain village. Elsewhere in Bulgaria they’ve had it much worse. I can’t remember when it last rained properly. We had a little sprinkle on the ground a couple of weeks ago, but proper rain, the sort that actually refreshes the garden? I don’t think we’ve seen that since the end of June.

And, yes, there have been some forest fires in Bulgaria. Nothing like the terrible scenes in neighbouring Turkey and Greece, but it’s still a worry. Our area isn’t particularly prone to forest fires, but it’s drier than I’ve ever seen it. I couldn’t believe it when friends told us they’d seen a villager burning a big pile of dry hay outside the village (which is surrounded by pine-covered hills). I mean, surely burning hay can wait until, I don’t know, we’re not living in an actual tinder box? Why burn it anyway? Why not just compost it or use it as mulch? The mind boggles sometimes.

I can’t emphasise enough how dry it is. There’s no green grass, only crunchy yellow stuff that used to be grass (I’m sure it’ll come back next year). We’ve basically given up on the flower beds. Apart from buddleias, which’ll flower on any old scrap of land, and gaura, which is a trooper of a plant, we haven’t had anything in flower for weeks. The veg garden trundles on, but is noticeably less productive, despite the regular watering. Even the courgettes are slowing down. And we’ve lost a few plants altogether – a few peppers, our entire row of celeriac. Even the mature linden and walnut trees dotted throughout the village are shedding their dry, curled-up leaves.

On the plus side, the sunflower fields have been stonking this year, even if they did go over a bit quicker than usual. (I think they’re grown for seeds, rather than the flowers.) And it’s been a good excuse to bust out the paddling pool we bought years ago, when some friends brought their toddler daughter to stay. I’m not ashamed to admit I’ve spent quite a few afternoons splashing my sweaty self in that little paddling pool this year. Rob and I have been engaged in a ‘Should we build a pool’ debate for the entire decade that we’ve owned our house (he was in favour, I wasn’t – all that maintenance). But it’s safe to say that little paddling pool has settled the issue once and for all. We’ll be building a splash pool as soon as funds and other jobs allow! Nothing beats bobbing about in cold water with a frozen banana daquiri. Anyway, if you don’t hear from me for a couple of weeks, rest assured I’m keeping cool and hydrated (rum counts as hydration right?) and slapping on the factor 30 every five minutes.

I’ll leave you with this lovely picture of a nearby sunflower field, taken at the beginning of the month – and a reminder to go outside at night and take a look up at those beautiful skies. 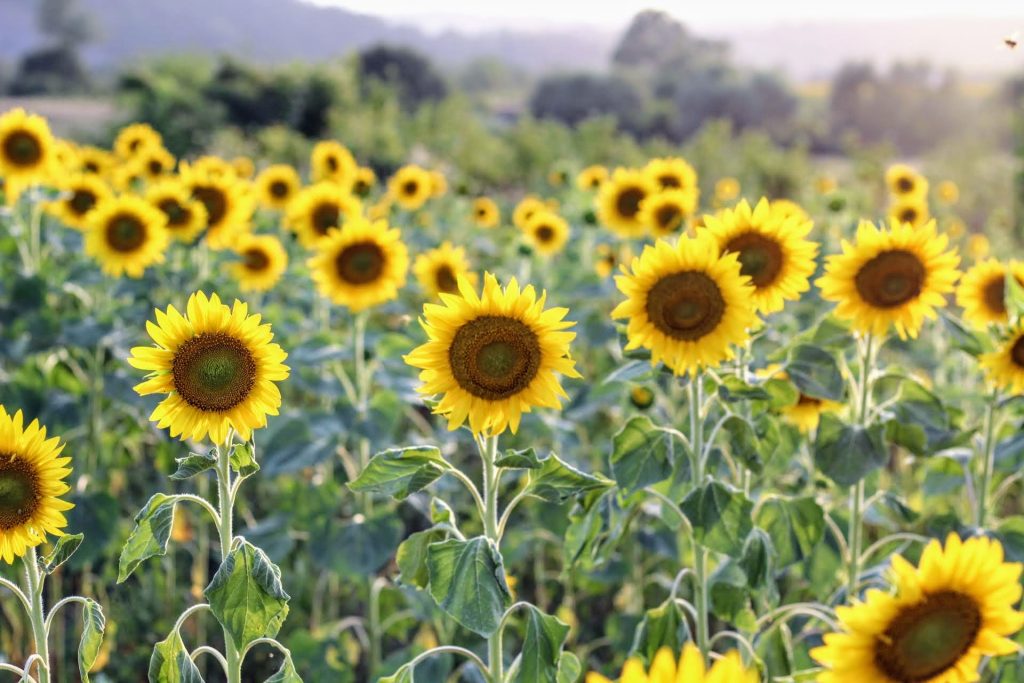 My favourite summer sight. Apart from Rob walking towards me holding out a frozen banana daquiri…