Return of the Gardening Bore (again)

In a list-writing mood today (quelle surprise), so I thought I’d present you with an update on our Gardening Bore 2021 antics.

If you’re new here, when we bought our Bulgarian village house it came with a large-ish (1/4 acre) garden – complete with some grass, mature trees and not much else. Over the years, we’ve added a veg garden and flower garden, summer kitchen (complete with homemade cob pizza oven) and a stone terrace dining area. We’re obsessed with our garden and gardening in general. True, we’re not always good at it (there’s been a lot of trial and error, and we’d never had a garden before this), but what we lack in experience and (in my case) upper body strength, we more than make up for in enthusiasm. If ‘enthusiasm’ means watching old episodes of Garden Rescue on YouTube and trying to figure out which one of the Rich brothers I fancy more…

This spring has been Cold (with a capital C), so we’re quite late sowing our seeds. The only things we started in March were tomatoes, parsley, chillies, sweet potatoes and lettuce – crops that either take a while to germinate or need to get started early. But this week we finally took the plunge and sowed almost all of our remaining seeds. Weather be damned. You know that saying ‘dress for the job you want, not the job you have’? Well I’m gardening for the weather I want, not the weather I have. 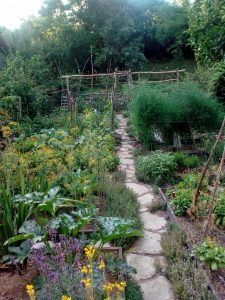 Here’s what we’re growing from seed this year (all of which are currently residing in the house until its warm enough to move them outside):

Meanwhile, already growing outside we have:

Christ, I was going to talk about the flower garden as well, but this is quite enough list-making for one day. I’ve satisfied my list craving. I’ve scratched my list itch. I’ve got that rosy, post-list glow and am lighting up a cigarette in bed while you snore, exhausted, beside me.

Wait, was that weird? I think I might have just made it weird.

If you’re still here, do follow me on Instagram, where I’ll be sharing lots of photos and videos of our Gardening Bore 2021 journey. And tell me below, what are you growing this year?