This is our life now. Every time we go out, we’re on high alert for abandoned wooden windows to finish off the rustic greenhouse. We eyeball people’s gardens as we drive by. We scour municipal bins. We tell anyone who’ll listen, ‘We’re looking for old windows. DO YOU KNOW WHERE THERE ARE OLD WINDOWS??’

Yesterday we found three big wooden windows by a bin in Etropole, which was a result. (There’s a sentence I never thought I’d write.) But, otherwise, trying to get Bulgarians to part with their old, unused windows is near-impossible. Last year we were driving along and saw a house that had just had all the windows replaced with uPVC, and the old wooden ones were piled up in the garden. ‘We’re making a greenhouse,’ we said. ‘Can we buy your old windows?’ ‘No, I want them,’ the owner replied. We drive by that house every week and the old windows are STILL littering the garden.

Another house on the way to Etropole is obviously owned by a glazer because there’s a window van in the garden, and assorted old windows outside the house. ‘Can we buy some of these old windows?’ we asked one time. The answer was no.

Yesterday we went to a place that sells new windows and doors and had piles of old windows and doors just lying around the grounds. ‘We’re looking for old windows,’ we said. ‘Can we buy these? We’ll pay you actual money. Please!’ we said (or thereabouts). The answer, again, was no. And this from a business that exists to sell fucking windows.

Am I missing something? Are rotten old windows secretly extremely valuable? Is there a thriving black market for them in Bulgaria that I’m unaware of? Or it is just that typical Bulgarian thing of never wanting to get rid of anything? (Which I totally get, if you’ve lived through hard times, as many older Bulgarians have. But if someone comes along and offers to put those windows to good use, save them from rotting away, clear space in your garden, and pay for the privilege…? Not tempting at all? Really?)

Bulgarians, explain yourselves. Why won’t you sell us your crappy old windows?

(In case you’re wondering, the windows we’ve already got for the greenhouse came from an English couple’s house. They were more than happy for us to take them off their hands for free. But as there aren’t that many English people around here, we’ve now officially exhausted the expat used window market.) 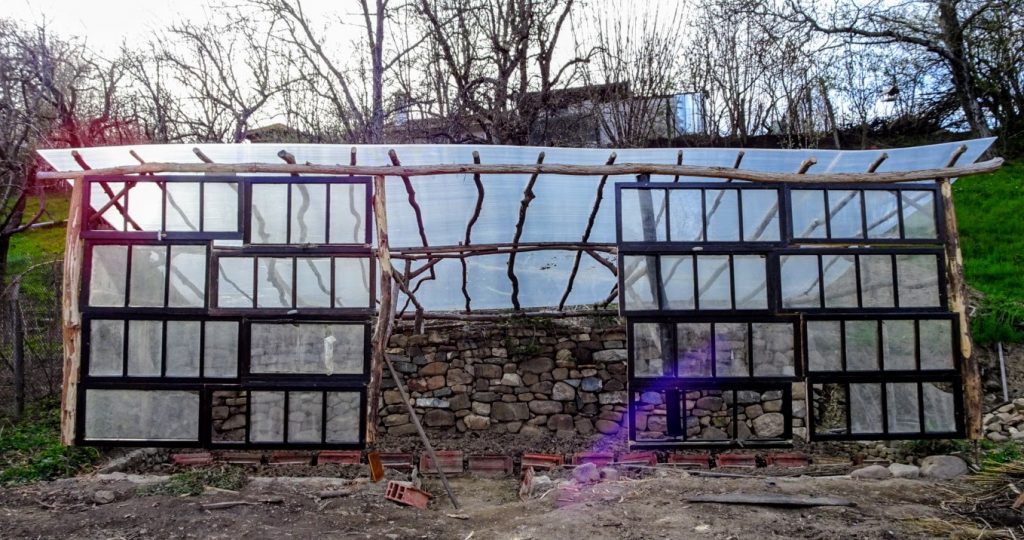 Here’s where we’ve got to so far. I promise it will look good eventually. And it’s not quite as giant in real life as it looks here…

I’m not overly concerned at this stage. We have plenty of windows to finish the front of the greenhouse, which is by far the biggest area, and the back of the greenhouse is made up of a stone retaining wall (it’s a lean-to greenhouse). That means we only need windows for the sides. I’m sure we’ll find some eventually. I just never imagined it would involve so much begging and bribery and crushing disappointment.

Help! Send me your tips for where to find unloved wooden windows in Bulgaria. Send an explanation of why Bulgarians love their old windows so much. Or, you know, just send us some windows. Thanks in advance.