Not bad food of the ‘bad for you but utterly delicious’ variety, like a bacon double cheeseburger or a Cornish pasty so dirty you smell it on your face (and scarf and coat) for the rest of the day. No, I mean food that turns out to be bad or off or, as seems to happen to us regularly, has bugs in it.

I remember one time, when I was a kid, my mum opened a tin of new potatoes (hey, it was the 80s) and there was a big piece of wire in with the potatoes. It was a scandal! I think we got a letter of apology and a £5 food voucher from the company. (Innocent times, jumpers for goalposts, etc.) Another time I found a strange little insect in my chicken sandwich on the Isle of Wight ferry. I *think* we got a replacement sandwich for that, but memory is a tricky thing and I could equally have been told by my family to stop being awkward and eat the bloody thing. Anyhow, those two incidences are the only bad food experiences I can really remember from life in the UK.

Then we came to Bulgaria and found shit in our food all the time. Like moths’ eggs in the brand new bag of flour (multiple times, honestly, from different shops). Or that time I tipped a packet of pasta into a pan of boiling water and hundreds of fucking weevils floated to the surface. Or that time I bought a bag of mushrooms and by the time I got home they were crawling with tiny worms. Bleurgh.

So last weekend we decide to make a curry feast. I tip some coriander seeds and cardamom pods into a pan to dry toast them, wander off, la la la, come back 30 seconds later and there are bugs – ACTUAL FUCKING BUGS – crawling all over the contents of the pan. So we check our jar of coriander seeds, having only topped up the jar with a fresh packet of seeds the day before, and sure enough there are bugs living in and eating the coriander. We had to chuck the whole lot away and spend ages checking every other spice we’d bought from that shop (one of the spice shops in the Women’s Market area, where we regularly buy our spices).

Within an hour of chucking away our bug-filled spices, I opened a (not cheap) bottle of wine and thought, ‘huh, weird, this smells like wet sponge.’ Yep, the wine was off too. By this point, it really felt like the universe was trying to tell us something – namely, that we should stop trying to have a boozy curry day and, I don’t know, eat celery and go for a run or something.

(On the subject of bad drinks, we once had this weird experience with really watery beer. We’d bought a bottle of Shumensko from the garage and when we got home and poured it into our glasses, it was oddly pale. Took a sip and it was easily 50% water. The bottle seal looked fine, so we’ve no idea why it was like that. IS NOTHING SACRED?! TRUST NO ONE.)

Why, Bulgaria, why? Why do you put up with this shit? I guess I should say at this point that fresh produce from the market is generally excellent, and the big supermarkets seem to be okay. Our bad food experiences usually stem from stuff bought at smaller shops. I’ve no idea why that is. Aren’t they generally sourcing from the same sorts of suppliers? Do smaller shops get the rejects that no one else wants? I JUST WANT BUG-FREE FOOD. IS THAT TOO MUCH TO ASK?

Anyway, back to the curry day and we struggled on making our curry feast, minus the coriander and unexpected protein. Rob even made some poppadoms, which we enjoyed with homemade mango chutney. (In your face, universe, we refuse to eat celery and go for a run. Your cruel games only make us stronger.) And it was all delicious. The end. 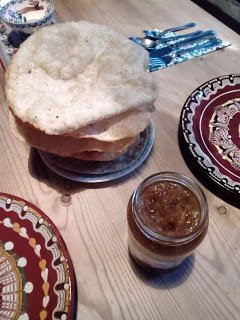 In other news, we had our first snow of the winter earlier this week. Quite a good showing for November… 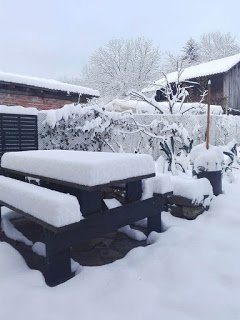 Also, the kittens have discovered the useful basket on the kitchen counter where we keep our phones, small change etc. It’s unbearably cute. 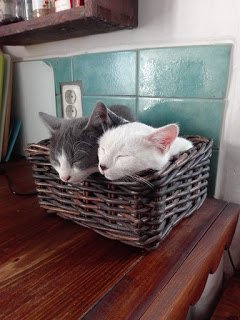 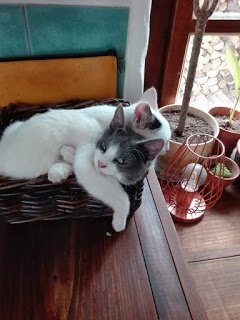