127. You know you live in Bulgaria when…

1. Your head nodding and shaking has got all messed up

Bulgarians nod for no and shake for yes. Of course they do! They couldn’t possibly do it the same way as the rest of the human world. We started doing things the Bulgarian way early on, in an effort to fit in, shaking our heads to agree with people, nodding smartly to say no. And it’s a habit we’ve kept up. Trouble is, often in the space of the same conversation, my old habits always kick back in.

This means a typical conversation may go something like this:

Me: *Shaking my head and smiling* Yes, it is. Hahaha.

Bulgarian: Do you want some juice? DRINK SOME JUICE.

Me: *Shaking my head and frowning* No, I don’t want any juice.

To further confuse matters, many young people do the English head movements as standard. Clearly, it would be better for everyone if we all just kept our heads still all the time. But you try keeping your head still in a conversation. It’s impossible. Most of the time I just end up moving my head in a big confusing circle as I ping between rest of the human world and Bulgarian head movements.

2. You clap when the plane lands

I still don’t really understand why Bulgarians do this on planes, but it’s the nicest thing ever. It makes me pleased to be among them and I’ve been joining in for years.

I used to be surprised when I saw people reversing up the motorway because they missed their exit. I used to be surprised when faced with an oncoming car overtaking when there clearly wasn’t time to do so. I was definitely surprised that time the car in front had a mattress on the roof, and it wasn’t tied down, it was just being held in place by all four people inside, who each had a hand up out of their window, including the driver. But, somewhere along the way, I just stopped being surprised. As Seth Meyers said of the first couple of weeks of Trump’s presidency, ‘the part of me that can be surprised is dead.’

So, just before Christmas, when we saw an empty car rolling across two lanes of traffic and into a field, being chased by a man who had clearly left his handbrake off* while stopped on a slope, we just shrugged. Standard.

*Use of handbrakes appears to be optional in Bulgaria. I even heard of one person having 30 driving lessons in Bulgaria and never once being taught how to use the handbrake.

4. You develop a taste for pickled vegetables

Seriously, some crunchy pickled carrots and cauliflower before dinner, with a wee nip of the neighbour’s rakia (the only rakia I can stomach) or a whiskey, is a great way to start a meal. No? Just me?

5. You see people with weapons and think nothing of it

The first time I saw someone walk by our house with a gun it was September 2011. We’d only been here for a month and it terrified me. Now, we don’t think anything of it when we see people walking around with shotguns and big axes. They’re just off hunting or collecting dead wood. Nothing to see here.

6. You eat whatever is put in front of you

Because it’s easier than explaining that you don’t eat it/don’t like it/already ate a big meal five minutes ago. Over the years, this has included me eating fish (I hate fish), that time Rob and I had to eat really soft pasta with cheese and sugar for breakfast, and a vegetarian friend eating lamb’s head soup (she definitely wins).

7. You get used to people telling you to dress warmer

Look, in winter it’s very cold and we dress accordingly. But, on a nice spring day, I may want to go out in just a jumper. Where is your coat? Bulgarians will cry. Why aren’t you wearing a coat?!! The locals seem to wear their coats until the beginning of June (by which point it could be 30 degrees). Then they put them away until the beginning of November (it’s not uncommon to have 20C days in November). It’s that simple. When Rob goes out on a warm November day in a t-shirt or flip flops, I now refuse to be seen with him. It’s not worth the stares and comments.

8. You get a bit weird about paper napkins

When our (significantly younger than us) Bulgarian teacher told us she collected paper napkins, I thought she was a bit mad. But, no, it’s a real thing in Bulgaria. I just read the marvellous Street without a Name, about growing up in communist Bulgaria, and the author also had a prized napkin collection. Obviously, I’m talking about pretty, patterned paper napkins, not just plain napkins in a pack of 100 (although, if those float your boat, I won’t judge).

Apparently, one of the previous Guinness World Record holders for the largest paper napkin collection was a Bulgarian woman, and she’s got about 40,000. The current record holder, if you’re interested (why wouldn’t you be?), is a German lady with 125,000 napkins. I currently own about 20 napkins, all of the same design and all from Ikea, so I don’t think that counts. But I certainly put a lot of thought into choosing them.

9. You own several pairs of these beauties… 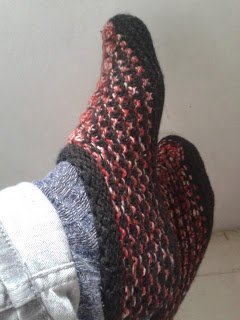