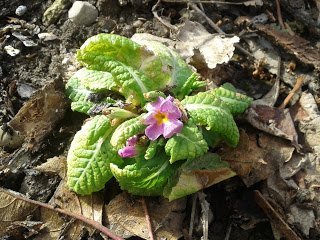 Hello and a very happy February to you. How is it for you so far?

As is often the way here, the weather has changed with the flip of a coin, and we’ve just had several days of warm (as in, above zero), sunny weather. This coupled with a little bit of weekend rain has killed off a lot of the snow. The road is now clear for the first time this year and the garden is teasing us by revealing big patches of grass.

The primroses under the apple tree have flowered, and, even more exciting than that, the kale has re-emerged from under all that snow. Woo yeah, KALE! If it carries on like this, we’ll be able to dig up the last of the parsnips soon (they’ve been frozen in the ground since December). Depending on the temperatures, we’ll probably sow our tomato seeds indoors in the next few weeks, and that’ll be the official kick-off of Gardening Bore 2017, in which I’ll wang on about how great vegetables are for four months and then spend a month whining about having too many courgettes and then two months insisting it’s too hot to do anything. I bet you can hardly wait. I know I can’t.

Iggy the cat has just been enjoying himself getting reacquainted with the various mole tunnels in the garden, but thankfully returned empty-handed (or rather, empty-jawed). I have a bit of a soft spot for moles. I mean, I know they bugger up the grass something awful, and we’ve lost more than a few young plants to their burrowing over the years, but they mostly stay out of the veg patch and they’re just so damn cute. I hate it when the cats leave us a dead mole. (They never eat them, they just deposit them on the terrace, belly up, little pink mole feet in the air.) I once read something about it being easier to move house than get rid of moles, which was initially really alarming but then strangely comforting – once I knew I couldn’t do anything about them, I just stopped being bothered by them. Now we co-exist quite happily (cat-on-mole attacks aside). And, as a bonus, we scoop up all their fine molehill earth and mix it with compost for seedlings.

So it seems like spring is just around the corner but you never can tell here. We might have another foot of snow in the garden in March, like in 2015, or we might have a baking hot spring, like last year. But the important thing is it feels like we’re coming to the end of winter. Yesterday I wore something that wasn’t an inch-thick jumper and chunky scarf for the first time since Christmas, and today I’m wearing a 3/4 sleeve shirt like some kind of forearm-exposing mad woman. I’d forgotten that I had wrists … or a neck for that matter.