66. [I’m not very good at this sort of thing so insert your chosen motivational phrase here]

Almost four years ago Rob and I sat in a pub in Southsea. It was a Sunday and we both had a bad case of the Sunday blues. I was commuting to London at the time – spending 4-5 hours a day travelling. (It doesn’t matter how much you like your job, that sort of commute gets you down in the end.) We were stuck in rented accommodation. It seemed no matter how hard we saved we couldn’t afford the huge deposit needed to get a mortgage. And, even if by some miracle we could buy a home, the thought of being saddled with a big mortgage and commuting for the rest of my life was overwhelmingly shit. I am not meant for 5.20am starts. I’m really not.

We sat with our ciders and our Sunday blues talking about the places we’d live if money was no object. For Rob it was France, for me a little Greek island. I mentioned offhand that someone I knew had bought a house in Bulgaria ‘for, like, five grand or something silly’.

And that was it. That seemingly harmless, throwaway comment changed everything.

I couldn’t really think of a reason not to.

So we drank up, headed home, fired up the laptop and found that you can indeed buy a house in Bulgaria for the price of a second hand car. We are GENIUSES we thought! Why hasn’t everyone IN THE ENTIRE WORLD moved to Bulgaria?

Admittedly none of the houses had indoor toilets or staircases. And some didn’t have power or water. But you really shouldn’t sweat the small stuff, man.*

It took a couple of years of saving, some of which was spent living with my parents to save as much as possible. My parents humoured us politely, clearly wanting this ridiculous Bulgaria phase to be over. But we clawed together £12,000, a shortlist of properties and two EasyJet flights to Bulgaria.

Family and friends fretted over how we’d cope with being in a strange country, with living in a wreck of a house and, most importantly, how we’d make money to survive. Our thinking was that if we just took the plunge, the rest would fall into place eventually.

I mean, what’s the worst that could have happened? Say we really couldn’t find a way to sustain ourselves financially and had to return home. We’d be young enough to start over and we’d have the bonus of a mortgage-free holiday/retirement pad. And we wouldn’t have to think ‘what if…’

As it happens, I landed a job that lets me work from home in Bulgaria 75% of the time. I would say this is lucky, miraculous even. But it sort of isn’t. I wanted this new life and took steps to make it happen. I’m certain it would have worked out one way or another – if not with this job then something else.

It’s not all whiskers on kittens and dewdrops on roses. Even in the exotic lands of Bulgaria there is still laundry and washing up to be done. Shit goes wrong with the car and there are these inconvenient things called ‘bills’ that arrive each month. And there is this one bit of plaster on the bathroom ceiling that KEEPS FUCKING FALLING DOWN. And we have cats coming out of our earholes.

But in general, it’s pretty brilliant.

I guess, in the spirit of January, this is my attempt at being inspirational. If you don’t like something in your life, you have the ability to change it. It might not be easy, or quick. But it’ll be worth it. (Even I didn’t think dealing with Bulgarian builders, bureaucracy and the language would be EASY. I’m mildly crazy, not fucking batshit crazy). For us though, making the initial decision was strangely easy, addled with cider as we were. The rest was bloody-mindedness.

I’m utterly without evidence, statistics or any hard facts whatsoever. I’ve never even read a self-help book. (Well, strictly speaking I started reading Men are from Mars, Women are from Venus once but I nearly choked on my own sick and had to give it back to the well-meaning friend who’d lent it to me. We’re still friends.) But anyway, I reckon when people go for what they want, it rarely, *rarely* backfires.

Finally, here’s a random picture of a donkey and sunshine. Because who doesn’t love donkeys and sunshine in January? 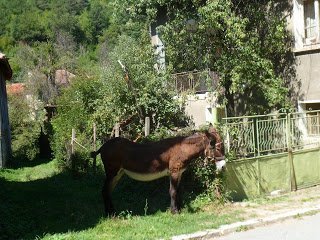