65. If you don’t like cats, you may want to skip this one

One of our cats, Moona (the mother cat), has been missing since the end of August. We choose to believe she’s gone to live elsewhere in the village rather than departed for cat heaven. To be honest, the kittens have grown up to be quite a handful, so I don’t really blame her. Sometimes I think about escaping them too, but I was here first so I don’t see why I should go anywhere.

You may remember the kittens used to hate us and act as though we didn’t exist. Well, since Moona left, they’ve become normal cats who purr and sit on our laps and stuff.

Iggy has grown up to be the biggest cat in the universe. Weirdly, he’s got a really baggy back and belly. Is that normal? I keep hoping he’ll grow into his skin but, every time he grows, his skin grows again too – it’s always one step ahead of his body.

Having not been outside yet, he’s officially the most pampered cat in the village. His massive white paws have never set foot outside. As a result, I’m not sure he really understands the tomcat job description. Perhaps he doesn’t think he’s a cat. Perhaps he thinks he’s a cushion. I’m sure tomcats are meant to be all rufty-tufty, peeing everywhere, don’t-step-on-my-territory kind of creatures. Not our Iggster. One of next door’s (boy) cats wandered in the other day. Rather than have a fight, Iggy simply sniffed the intruder’s bum and rubbed up against him, purring. It was quite touching really.

So, it falls to Pepper to be the mean one. And she doesn’t disappoint. She’s like an evil squirrel. She’s going to be a good tree climber when she goes outside – she’s been practising on our door frames for some time now. She’s rather aloof, bless her. She likes Rob well enough, but not me. The other night she sat on my lap, for the first time EVER. It was obviously a momentary lapse though because now she’s gone back to running away from me. When I do manage to corner her and pick her up, she actually harrumphs. I’d never heard a cat sigh before. She sighs and stares off into space, avoiding all eye contact with me until I give up, broken-hearted, and put her down again.

But at least she mighty purty. And she’s not under any illusions that she is a beanbag.

In addition, our neighbour’s three kittens have been trying to move in with us. One is a friendly, short-haired, white boy cat (Iggy’s little bum pal). I’ve named him Buddy and I want to steal him. One is a noisy, unfriendly, long-haired ginger beast who constantly goes ‘waaa’.  And the last one is a tiny, dirty fluffball of a thing who follows Rob around. They run into our house any opportunity they get, settling in under the table and getting very cosy. The rest of the time, they reside on our outside staircase and occupy themselves with trying to trip us up.

I’m currently in the process of convincing Rob that Buddy should move in with us. (Just Buddy. Not Dirty and Noisy. Is that mean?). I’ve even pulled the ‘All I want for Christmas is Buddy’ trick but to no avail. I’ve tried explaining that, with Moona gone, we have a cat vacancy. And he can mentor Iggy in the ways of the tomcat. Perhaps he can even teach Pepper to love. Perhaps.

UPDATE: I wrote this post a couple of weeks ago and never got around to posting it at the time. Since then our neighbour, Svilen, has finally found homes for Buddy and Noisy, so they’ve gone to live elsewhere in the village. I’m a bit gutted as I not-so-secretly wanted to keep Buddy for myself.

That just left the tiny, dirty fluffball without a home. Svilen doesn’t think much of this cat and hasn’t found him a home – he calls him ‘the runt’. And he is a bit of a runt. But now he’s our little runt. He’d been trying to move in with us for weeks anyway, and following Rob around outside like a little puppy. Then we started feeding him. Then one night he came inside and he’s been here ever since. Svilen is very amused and thinks we’re crazy cat people. Can’t say I blame him.

Despite his fluffy and feminine exterior, he is a little boy and we wanted to give him a suitably macho-man name. So, readers, meet our newest cat, Binky: 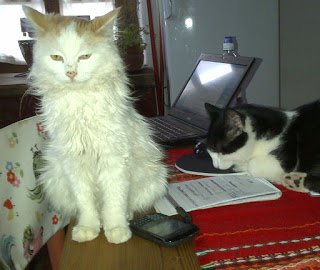 Words simply cannot describe the clinkers this cat gets.