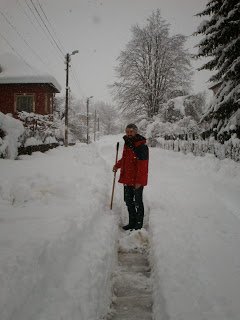 What is it about snow that makes me behave like an idiot? It starts with me screaming “It’s snowing, IT’S SNOWING!” while jumping up and down (and clapping). That humiliating display is followed by me taking photos of everyday things covered in snow – “look, the apple tree, IT’S GOT SNOW ON IT!”, “look at the roof, THERE’S SNOW ON IT!”, “quick, take a picture of me IN THE SNOW”. Finally, I head to Facebook to tell the rest of the world that, yep you guessed it, “IT’S SNOWING!”

In my defence, I have never had a white Christmas. As a native Pomponian I’ve hardly ever encountered snow – and never safe in the blissful knowledge that I don’t have to use British public transport anytime soon. It’s pretty heavenly being holed up at home with a fully stocked larder, knowing you don’t actually have to go out anywhere. So excuse me for being such a bothersome snowtard.*

You may have guessed from this introduction that we had a white Christmas! Very beautiful it was too. We had a lovely quiet Christmas day just the two of us – cooking a full roast dinner in our wood-burning stove with military precision and, if you’ll forgive the boast, timetabling to die for. Our neighbours gave us a turkey for our Christmas dinner – thankfully, killed, plucked and gutted. Speaking of meat, Christmas Eve we awoke to the sound of our neighbours slaughtering a pig. In the street. And then another pig. Still in the street. Followed by skinning and chopping the pigs. In the street. It’s pretty normal to slaughter your own pigs in Bulgaria but seeing – and hearing – it happen takes a bit of getting used to. I might be a bit damaged now, in a Silence of the Lambs kind of way. Christmas Eve is a big deal for Bulgarian families and everyone gathers at home for a vegetarian feast. Imagine our surprise when we were invited next door, expecting veggie delights, and were faced with all manner of…pork! Apart from a side of Russian salad, it was pork, pork and more pork. I’m starting to think we might have fallen in with rebels…

My favourite pork-related event happened a few days after Christmas. We were sitting at the kitchen table one evening when we heard the fateful cry “Bobbyyyyyyy” – our neighbour’s way of saying “Hello there, Robert, could you come out here? I’d like a moment of your time please?”  Rob disappears outside and returns 5 minutes later, slightly bemused and clenching a big joint of pork in his bare hand. Another meaty gift from the neighbours. They’re so sweet. And total feeders.

The time between Christmas and New Year was spent sleeping in late, watching Dexter boxsets (I know, I’m 5 years late to the Dexter party), baking, eating and going for one (one!) long walk in the snow. New Years Eve we went next door for a drink at midnight. There were bubbles, good wishes all round, and fireworks. Much like any NYE in England – except, they let off the fireworks in the street while holding them in their bare hands. And they made us come back again at 10am on New Year’s Day for a coffee. Those sadists.

Happy 2012 everyone, may all your dreams for this year come true.

*After the initial snow euphoria, comes the reality. Reality hits a week later when you realise that, while you have enough dried pasta and chickpeas to feed the entire village, you are in fact running out of milk, and Rob’s drill has broken, and you have to – gulp – go out in the snow. That’s when you realise snow is actually really, really shit. And it turns out Uma the Puma, my beautiful car, is pretty darn shit in the snow. And for all the “they totally clear all the roads round here” assurances, reality is actually a little bit shitter. Yes, they fully clear the motorway and big main roads, but getting out of the village and to those roads is, well, shit. In reality, “clearing the road” in our village means a snowplough coming through (once) and clearing the top layer of snow off the road – leaving nothing but a layer of sheer ice to drive on. You know what I think of driving on ice? It’s shit.

And fresh milk is totally overrated. I hope.