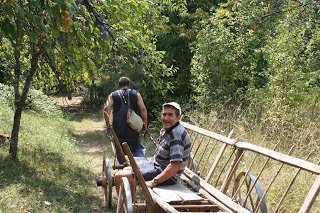 Being in a village (as opposed to the middle of a field) we have actual neighbours. Obviously this is marvellous, especially when they are as lovely and helpful as Svilen and Penka. They are in their sixties and, as their sons no longer live at home, they have sort of adopted us – whether we like it or not.

We have coffee at their house two or three mornings a week. Usually this is initiated by Svilen wandering into our kitchen (he always just lets himself in) and asking ‘café?’ If for some reason we haven’t yet unlocked our front gate – thus denying him immediate entry – he will simply stand outside and yell ‘Bobbyyyyyyyyy’ (their name for Rob is Bobby) until we emerge. Duly summoned, we head next door for a small, stiff black coffee. I never drank black coffee before moving to Bulgaria, but asking for milk, or – gasp! – a latte is simply unthinkable. Once I took around a cup of tea (that I was half-way through drinking) but I got such strange looks I’ve never dared do it since. Often the coffee is accompanied by biscuits, swiss roll, maybe a yummy banitsa (cheese pastry) or, erm, pork ribs. One morning we had turkey for breakfast.

Once a week or so we get invited round for dinner. Imagine a movie called my Big Fat Bulgarian Dinner Party and you get the idea. At least a dozen people crammed in to one room. We’re never really sure who anyone is but they’re all very friendly. And loud. Very, very loud. There will be at least two phone calls made or received – always taken on speaker phone thus allowing further opportunity for shouting. One time we saw Penka conduct an entire phone conversation while someone else held the phone a few feet away. There is an abundance of whisky and rakia (grape brandy) or, if I’m really lucky, delicious homemade red wine. Everyone seems to be called Maria or Niky. Dinner is most definitely meaty and hearty. And you never get given a knife. I used to find eating turkey with just a fork quite awkward but now I’ll happily dive in with my fingers. Good job, as you MUST eat the equivalent of your own body weight in food.

They have just about accepted the fact that I don’t eat fish. But they’re not happy about it.

Obviously they’re total feeders, like any parents. They’re always giving us stuff to make sure we don’t starve. Recently they gave us four giant pumpkins (four! Pumpkin recipes welcomed!). Yesterday we got given a random bag of crisps. At breakfast time. And, upon my refusal of another biscuit, Svilen appeared to be saying (through some very clear gesticulation) that I should eat a lot more biscuits to get nice and big, like his wife. Now that was an awkward conversation.

And that brings me on to language difficulties. We still can’t really communicate with our neighbours. We can speak a bit of Bulgarian, and our vocabulary is slowing expanding but we’re not up to full-blown conversations yet. So we mainly smile and nod a lot, or we all watch something on TV together – there’s a cookery programme on each morning that we particularly enjoy, or we settle on Folk TV (which is as brilliant as the name suggests). Often Penka will tell us a jolly good joke – we can tell it’s a joke because she gets more and more worked up as she talks and ends with a big laugh. We laugh along manically even though we have no idea what the joke is.

It’s okay, they know we can’t understand them yet. They would have liked us to learn more Bulgarian by now but they’re not angry…just disappointed.