32. Spirit of Burgas Festival – an update 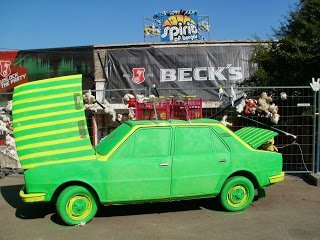 We are now the proud owners of two tickets to this music festival! I’m very much looking forward to some big-time Bulgarian festivalling.

As well as The Great Bald One Moby who is headlining, they’ve announced Skunk Anansie are playing. I know them, they did a song I used to like when I was an angst-ridden teenager: Hedonism (Just Because You Feel Good). Their singer is, as Queen Tyra of Banks would say, FIERCE.

By the way, I think more songs should have subtitles in brackets.

Also playing are the Deftones. I’m sure I’ve heard of them somewhere. A quick scout on Wikipedia tells me “their sound has been described as alternative metal, art rock, dream pop, experimental rock, nu metal, post-grunge, progressive rock, drone rock, shoegaze metal or post metal, post hardcore and rap metal.” Well, that’s cleared that up then. I’m really not sure what ‘shoegaze metal’ is but I hope it involves moshing. I moshed once. It was excellent.

Tickets are now on sale priced at 99 Bulgarian Lev each. That’s about £45! You have to pay an extra 30 Lev to camp at the beach but still, 60 odd quid for a 3-day festival is a steal. Check out http://www.spiritofburgas.com/ for more information.