22. Learning to speak the beautiful language of Bulgarian 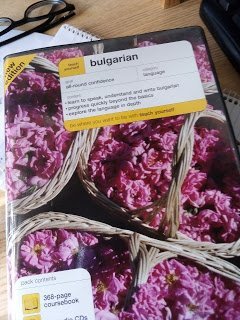 So we have a Teach Yourself Bulgarian book and CD comprised of 20 units. So far, we’re on unit 2. We have been on unit 2 since September. This is not exactly lightning fast progress on our part. Clearly we’re struggling, which is not helping our motivation.

All I can say in our defence is it’s, like, really hard!

Let me put it this way: imagine you’ve done a hard day at work, it’s dark when you get home, Spooks is coming up, the kettle’s on, so too are the comfy trousers with the elasticated waistband (there’s an exciting glimpse into our home life for you). The lazy evening ahead is panning out beautifully. Except, oh no, wait, you’ve got to learn BULGARIAN! Which would you choose? Cup of tea, feet up and some no-brain-required spy fun? Or learning a language where not one single word – or even the alphabet for that matter – is familiar?

That’s right, the alphabet is the Cyrillic alphabet, which has a greedy 30 letters. Some letters are totally alien, like Ф for example (it’s an ‘F’ to you and me). Others are just downright sneaky – they look exactly like our Roman letters but mean something totally different. B means V, H means N, P means R, C means S, X means H, and Y is a sort of ‘oo’ sound! Confused? So, the road sign for the town of VARNA would actually read ВАРНА. Thankfully, some of the other letters do look and sound the same as ours, e.g. E, A, T, K, O, M.

We have managed to learn the alphabet and can read things in Bulgarian, so that’s a good start. Except we can only read in capital letters. The lower case letters sometimes differ! A little T is an ‘m’ for instance. And don’t even get me started on letters in their hand-written form – yep, you’ve guessed it, they’re different too.

As for the words themselves, Bulgarian is sort of like Russian, Greek, Serbian and Macedonian all mixed together with a dash of Turkish for good measure. There’s nothing intuitive about it for a native English speaker. It’s not like learning French where you can sort of muddle through and catch the general meaning. There’s nothing familiar at all! Oh, except the word ФАКС (FAKS) which does actually mean ‘fax’. But that’s no good because nobody uses faxes anymore. Or maybe they do in Bulgaria.

Pronunciation is (shock) fairly easy to pick up, much more so than English because there’s always a one-to-one correspondence between the written letter and how you say it. Basically, there’s only one way to pronounce it. An ‘A’ for instance is always pronounced ‘ah’. Stress is a little trickier. It’s very important to get the stress right in words of more than one syllable; otherwise you get nothing but blank looks. As yet, I’ve not worked out any rules for where the stress falls in a word – it can fall on any syllable.

They roll their r’s. I have never been able to do that.

When Bulgarians say yes (“da”) they shake their heads. And when they say no (“neh”) they nod. It’s barmy. It’s like they decided to do the opposite to the rest of the world just for giggles.

Okay, so far we can read the alphabet, say hello, goodbye, good morning/evening, please, thank you, I am from England, two large beers etc. The very basic tourist stuff. But our vocabulary is shockingly slim. On our last visit we were in a shop and realised we don’t really know any useful shopping words at all (like cheese, bread, bag). So, we purchased a nice big Bulgarian-English dictionary while we were in Sofia. And we fully intend to open it one day too.

In conclusion, we just need to suck it up and get on with it. In the words of Nike, the Greek goddess of sporting footwear: Just do it.