The curse of the inflatable pool

I jinxed the summer by buying a big, dumb inflatable pool. That’s what I did. We had all these plans for August. We had our Sinemorets trip with family, then we were looking forward to a week of quiet time just the two of us, then we had more visitors coming from England, then another week off doing some work on the summer kitchen before going back to werk-work in September. Basically, we’d planned one of those fabled European Augusts where no one does very much work and you’d better hope you don’t need an emergency plumber because everyone’s on holiday. One of those Augusts.

We put up the hammock. We filled the freezer with delicious homemade breads and breakfast goods for all our guests. We put up that bloody pool. We planned nights of stargazing and toasting stuff over fires. Days of drinking frozen margaritas in the blow-up pool. This August is going to be brilliant, I thought.

Then life went, ‘Ahem, how about this instead?’

So I’ve been in England for the last 10 days for family reasons. And everything apart from Sinemorets (which was lovely) has been put on hold for now. It’s fine. England is where I’ve needed to be and it’s been good to hunker down with my family for a while. But I have missed My Big Fat Bulgarian August.

Back in Bulgaria, Rob’s taken the pool down because he doesn’t want lazy margarita days on his own, and looking at the increasingly lopsided inflatable pool – we don’t have a single properly flat piece of land in our whole garden – was becoming a bit of a bummer. (But don’t worry, we didn’t waste the water. We used it to fill our tanks in the garden, and it’ll water the plants for the rest of summer and autumn.)

We only used the pool a couple of times. The bloody jinx.

So the moral of the story is, don’t smugly plan ahead too much because life will kick you up the bum and say ‘I don’t think so’. And don’t buy an inflatable pool. You know, just in case.

And now it’s nearly September, which is bonkers. But I’m alright with the arrival of autumn. It’s my favourite season. Yes, the darker mornings take a bit of getting used to, but we just go with it and drink our morning coffee by moody candlelight. (Highly recommended, if you can spare the time for a leisurely candlelit tea or coffee session in the morning. It’s such a soothing start to the day.)

On the plus side, autumn is much better weather for walking. And you know I love the heartier autumn food. So I’m looking forward to getting back to the Bulg … and just in time for My Big Fat Bulgarian September? We’ll see. I’m not planning too much right now. The curse of the inflatable pool still looms large. 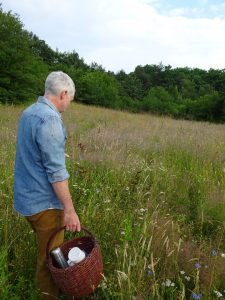