After so many years here, it’s always fun to find a new Bulgarian thing that confuses me. I mean, it’s not always fun at the time but it generally makes for good blog fodder.

And so we found ourselves wandering around Sofia’s Lyulin 5 neighbourhood – a nice, leafy neighbourhood on the edge of town, comprised of lots of numbered blocks of flats. We were looking for block five hundred and forty something.

‘We’re back in the 530s. What the hell kind of numbering system is this?’

Reader, we had gone in a straight line. Surely adjacent blocks should be in some sort of recognisable number sequence?

We asked a few people where we could find the specific block we were looking for, but no one knew any blocks except their own. And the sat nav was useless.

Hot, sweaty, confused and bordering on sunburn, I decamped to the neighbourhood’s Lidl car park and left Rob to figure it out while I enjoyed a cold beverage. Standard.

He prevailed in the end, returning triumphantly to the Lidl car park with the vintage record player that we were there to pick up.

Yes, all that for a second-hand record player, bought off some bloke on OLX, Bulgaria’s version of eBay or Facebook Marketplace.

(OLX, by the way, is a joy. You can find all sorts of unwanted and second-hand crap on there. Vintage treasures. Electrical goods. Puppies. One guy was giving away a pair of shorts. There’s something distinctly ominous about advertising ‘free shorts’ online, right? Has a whiff of serial killer about it.)

And all that after driving so far around the ring road, we’d gone through Gorna Banya, right on the outskirts of Sofia, and out the other side. (Don’t ask me. We’d been at Ikea, and the sat nav seemed to think that was the most sensible way to get to Lyulin from Ikea.)

This is all very dull if you’ve no idea where Gorna Banya or Ikea or Lyulin is, but my point is, sat in that car park, after a long drive around the ring road, drinking an Emergency Coca Cola, it really felt like Lyulin was the arse end of nowhere. So imagine my surprise when we drove home via the city centre, and found we were only five minutes from the dead centre of Sofia. After going all that way around the ring road, it was discombobulating to suddenly appear in the centre, staring down the barrel of the old Communist Party House. Like we’d accidently driven through a tear in the space–time continuum or something. Weird.

Anyway, we got a cool record player and I don’t think I’ll ever figure out that block numbering system. You must need a degree in physics or something. Let’s just say I have a new-found respect for delivery drivers working Sofia’s residential neighbourhoods. 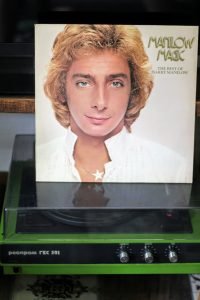 Hell yeah, we rock the Manilow in this house.