‘But cheese’ … a cosy chat about being vegan

A LOT of people asked me about veganism when I was back home. And the prevailing sentiment was, ‘I could never give up cheese’.

Believe me, I get it. I was the same. We’d watch all those documentaries about the horrors of factory farming and I’d say ‘We should go vegan’ in one breath, then ‘but cheese’ in the next. I was a cheese fiend. One of my favourite side dishes at our local pizza restaurant was – quite literally – fried, breadcrumbed Dairylea cheese triangles. No cheese was too dirty for me to enjoy. No wedge was too big. No blue was too stinky. I loved it all. And this is my message to you: if you can’t bear to give up cheese, don’t.

Vegan in ‘people should eat cheese if they want’ shock

Listen, personally, I don’t want to eat cheese. I’m quite happy with my vegan cheese substitutes. But as real cheese is the one thing holding most people back from giving veganism a try, I do think we should be more pragmatic about it. If cheese is stopping you adopting a plant-based or plant-heavy diet, I say take the leap 90% of the way, and keep chomping that cheese.

That was our plan. We initially decided to eat vegan meals during the week and have the odd bit of dairy (mainly cheese) on weekends. But we soon found that we just felt better without dairy. Monday mornings after a cheesy Sunday feast were … well, let’s just say they were bad toilet times. I mentioned this to my mum at the time, how the dairy was messing with our stomachs, and she suggested we eat cheese more often ‘to keep our tolerance up’. (Mums! Am I right?) That was the final straw for us. Why keep our tolerance up for something that was making us feel rubbish? So our ‘eating vegan during the week’ stance very quickly became ‘eating vegan all the time’. For us, it was that simple.

You might find the same. You might not. You might really look forward to that cheesy treat and never give it up. One thing’s for sure: no one is keeping score.

Because there’s this thing among veganism where you have to be a ‘perfect’ vegan. But it’s bullshit. I’m not even sure there’s any such thing. (For example, Rob and I eat vegan 100% of the time, but we’ve a long way to go before everything we buy – makeup, toiletries, cleaning products, etc. – is all cruelty free. And I have no problem buying second-hand wool or leather items. (Not new, but second hand.) All of which would probably outrage many vegans, who’d insist we’re ‘plant based’ not really ‘vegan’. To that nonsense I say, ‘Up yours, pal. I’m doing my best here.’)

Anyway, it’s not like you get a special membership card in the post. It’s not like you’ll get put on the Naughty Step if you choose to have dairy cheese on your Beyond Burger. Like I say, no one’s keeping score.

So if you fancy giving up other forms of dairy (everything but cheese, basically), good for you. Those are the easy bits, if I’m honest. Switching out your milk is a doddle. Most British supermarkets stock vegan cream, vegan sour cream, vegan yoghurt, vegan ice cream … all the non-dairy goodies you could want. (If, like us, you don’t have a vegan-friendly supermarket nearby, there are other workarounds, such as using coconut milk, or making your own cashew cream.)

Don’t you ever just … cheat?

This was another question people asked a lot. They’d lean in and say something like, ‘But don’t you ever just have the odd egg or something?’

The answer is no, I don’t have the odd bit of non-vegan food. Eggs and meat gross me out these days. And I’m never tempted to eat dairy. (I’m not saying I don’t miss cheese. I do. But I don’t miss it enough to eat it, if that makes sense.)

Have I ordered the odd pasta dish in a restaurant, only for it to arrive at the table unexpectedly smothered in big shards of parmesan (not listed on the menu)? Abso-fucking-lutely I have. Did I just scrape that cheese aside and carry on eating? You know it. (My thinking is, if I haven’t explicitly told the wait staff that I don’t eat dairy, I’m not going to send it back because the chef added a cheesy embellishment on top.)

Let’s just say I have a newfound respect for people with food allergies, because a lot of the information on menus, especially here in Bulgaria, can so often be sketchy or just plain wrong. (I’m thinking of one particular rice dish we ordered, early in our vegan journey, that was so obviously buttery, despite the menu – which had clear allergen symbols – claiming it didn’t include dairy.) People who are allergic to dairy, coeliacs … I salute you.

What about vegan superpowers?

And the other thing people really wanted to know was whether I actually feel any better.

Hands down, yes. A thousand times, yes. My thirties were a bit up and down health-wise. My asthma, which has always been mild, ramped up to worrying levels. I had back and hip ache like an old woman. And at one point I had this unexplained pelvic pain for months and months (scans and tests showed nothing. It’s still a mystery). Now I feel like a 30-year-old again. I’m back to minimal inhaler use. I feel genuinely optimistic about growing older, instead of seeing it as a slippery slide into ill health and frailty.

Read anything about veganism and you’ll be promised everything from weight loss and amazing skin to brighter eyes and gorgeous, shiny hair. Is any of that true? Maybe for the lucky ones. My hair is the same unruly, stubborn thatch it’s always been. I will say I’m able to maintain a healthy weight without really thinking about it (which is something I haven’t been able to master since my teens). My skin is better (still not great, but definitely better). And, weirdly, my fingernails are now super-strong and grow at a crazy rate (which is new, as I’m an ex-nail-biter). That’s about it, though.

So I’m not going to tell you you’ll look like Scarlett Johansson and live forever as a thin-limbed, shiny-haired, Bambi-esque goddess. You might, like me, just need to file your nails more often.

Let me finish by saying I’m not trying to convert anyone to a plant-based diet. I don’t care whether you’re a die-hard meat eater, a much better vegan than me, or something in between. Nor do I care to debate my lifestyle choices with people who, you know, make different choices. Internet warriors, stand down. Go and have a nice cup of tea and watch Ted Lasso or something.

I just wanted to scrawl down some of the things people most wanted to talk to me about during my trip home. Mostly cheese. And again, my feeling is you shouldn’t let the whole ‘but cheese’ thing stop you adopting a more plant-based diet, if that’s how you’re leaning. Swap out what you want and keep the things you love, and take it from there. 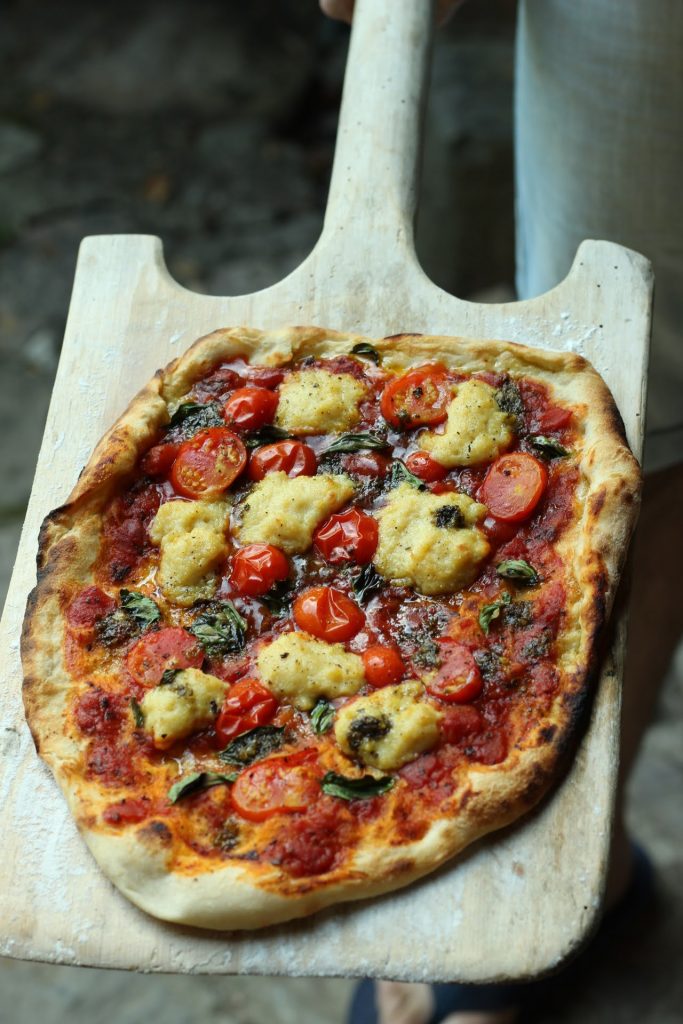 Here, have a picture of a lovely homemade vegan pizza.