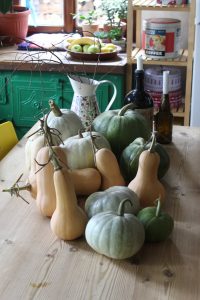 Our pumpkin and squash harvest.

Anyway, we harvested our David Pumpkins and Big Butt Butternuts (that’s another story) the other weekend. Not a great harvest this year. Last year we ended up with 34 butternut squash, which I proudly arranged in descending height order. Like the absolute mad woman I am. This year: seven butternut squashes. Seven! It’s pitiful. I can barely arrange them in size order! But considering most of our squash plants died a mystery death in early summer, we’re grateful even to have seven.

So where did the pumpkins come from? From self-seeded plants that sprang up in our compost heap and around the garden. Usually I just pluck these seedlings out and throw them away. (I read somewhere that self-seeded squashes and pumpkins usually aren’t edible because they cross-breed with anything in the same family, including courgettes and what have you.) But this year, with our butternut squash plants dying off by the dozen, I decided to leave the mystery self-seeded little plants and see what Frankenstein beasts they’d produce. The result was seven lovely pumpkins of various sizes and shades of green. They may not be edible – we won’t know until we try to eat one – but they sure are pretty. We’ve already carved the biggest three for Halloween, and we’ll attempt to eat the littler ones over winter. 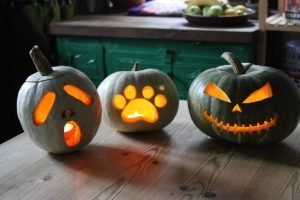 Rob’s knife skills, not mine.

(I’m going to admit a traitorous secret here. Traitorous to my ‘white middle-aged woman on Instagram’ breed. Here goes … I don’t even like pumpkins that much. They look gorgeous, but they’re not that great to eat. I think we can all be honest about that, right? They’re just mushy, watery butternut squashes. Just eat a butternut squash! It’s infinitely better. So, while the rest of the internet is busy celebrating all things pumpkin this month, I’m still grieving the loss of my butternut squashes.)

Still, David Pumpkins do look good carved, don’t they? We had to carve them early this year so I could enjoy them before I go back to England this weekend. Yes, I’m heading home for the first time in two years. Which should be … interesting. I mean, I’m looking forward to seeing everyone. I just wish they’d all come here instead.

Just checking, is it still illegal to sneak a kitten into the UK in your suitcase? Asking for a friend. (Little Mim will be fine without me, by the way. She’ll be with her favourite human, Rob. But I’ll be bereft. Rob’s under orders to make sure Mim is on screen whenever we Skype.)

So I’ll miss my cats. And my David Pumpkins. And, weirdly, I’ll miss the smell of Bulgaria. It’s that wonderful time of year when the village smells of woodsmoke. Fresh air and the first tinges of woodsmoke, as smoke hits the cold morning air, has to be one of the best smells around. It’s the autumn equivalent of freshly cut grass.

Speaking of woodsmoke, here’s the obligatory autumn picture of Rob stood in front of our annual wood delivery. This wood is for next winter (this winter’s wood is already chopped, stacked and ready to use), so it’ll get piled up neatly and left aside until next spring, or whenever Rob gets around to chopping it… 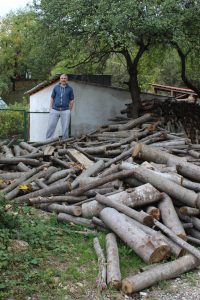 Expect exciting dispatches from England – in which I’ll probably moan about the proliferation of vape shops and the ruinous price of everything – next time. Until then, do enjoy replacing the word pumpkin with David Pumpkins. You’re welcome.