It’s hard to make friends later in life, isn’t it? I often wonder how people do it. So many of my longstanding friendships started in the workplace or stretch all the way back to my college and university days, so now that I work from home and am about as likely to enter an educational environment as I am a tanning salon (i.e. not very), I’m screwed.

You see, I’ve never been someone who makes friends in a social setting, like at a party or down the pub. I’ve met boyfriends and, shall we say, casual male acquaintances that way. But friends? Real friends. Not so much. I’m not sure what that says about me, but it’s not good.

I just don’t understand how people like me – so, people who are 40, verging on grumpy and don’t have to leave the house for work – ever make new friends. I presume they have actual hobbies of the sort that involve official clubs and groups. Or maybe they’ll just talk to anyone. Again, I’m screwed on both counts. 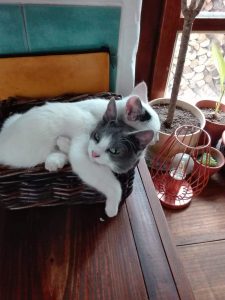 I am definitely Merlin (the grey cat) in this scenario. I’d really rather not…

Then there’s the whole ‘still not being fluent in Bulgarian’ thing, the fact that we live in a sleepy Bulgarian village, and that most of the other villagers are over 70. Screwed, screwed and screwed. I mean, we’ve integrated pretty well into our village, and are on great terms with our neighbours. But, as I said, they’re old enough to be our grandparents, and half the time we have no idea what they’re saying. They could be talking about eugenics or denying climate change or asking if we’ve accepted Satan as our lord and saviour for all we know. Meanwhile, we’re smiling and nodding along like a pair of idiots…

All of which is why, when Rob and I bother to talk about life goals, we’ll often include ‘make some actual Bulgarian friends’ on the list. You know, Bulgarians who are a bit more our age and have similar interests to us. People we can chat to about something other than the health of their kidneys or the latest person that they know (but we probably don’t) who has died.

It’s not that we’re lonely. Far from it. We’re insular and far too comfortable in our own Bulgarian bubble. Which is a big part of the problem. We make zero effort to meet new people or step outside of our comfort zone (our comfort zone being the kitchen and garden). But even if we were inclined to make an effort, and there wasn’t a global pandemic going on, where would we start? Sign up for tango lessons in Sofia? Start our own cat appreciation society? Go on a themed group holiday (‘mushroom-picking for the over-40s’. That sort of thing. Actually, I probably would go on that holiday)?

Seriously, how do people do it? Do you know? Do you have sociable friends who throw themselves into interesting activities? Have you moved to a new country or city and managed to get people to like you? How? Enlighten me. Obviously, the chances of me actually trying any of your suggestions are slim. But I’m genuinely interested.