A lovely, sticky ginger cake for you (vegan, but you’d never know it)

As someone who’s constantly obsessed with my next meal, I’m still surprised how much I’ve focused in on food during this whole pandemic thing. Which is partly why I’m enjoying Instagram so much. (If you aren’t yet following me, I’m @auntie_bulgaria. I share lots of pics of life in Bulgaria. Not just food.)

On Instagram I get to see what other people are eating. All the time. People I don’t even know. I ogle Ukrainian dumplings on an almost daily basis. I lurk over other people’s breakfast goods. And I get to enjoy immaculately decorated cakes of the sort that I would never in a million years bake myself.

Because, when it comes to home baking, I tend to prefer easy, rustic cakes. The kind of cakes that taste delicious, but won’t be gracing any magazine covers. I’m talking about the cakes of my childhood. Cakes that you’d see at a 1980s church fete. There’s no mirror glaze or ombre icing in this house. (But only because I’m too inept and impatient.)

This sticky ginger cake is the perfect example of a rustic yet tasty beauty. You can take it to the church fete and hold your head up high. 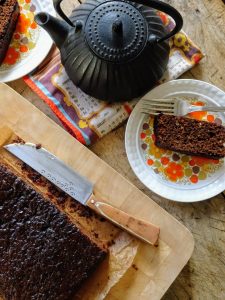 I’ve been baking this ginger cake for years after I found the recipe on Esther Walker’s then blog Recipe Rifle. (She’s since started The Spike.) I’ve adapted it over the years to suit our pantry staples. And then, when we gave up dairy and eggs, I simply switched out the milk to plant milk – by all means use whatever milk you like, dairy or otherwise – and added a little more raising agent to replace the one egg. I genuinely can’t tell the difference between this and the previous version. It’s just as good as it always was.

This ginger cake is beautifully fluffy, light and moist – and I think it’s even better the day after baking, which makes it a good option if you need to knock something up in advance of a gathering. (Remember those?) Plus, it’s one the easiest cakes you can make. 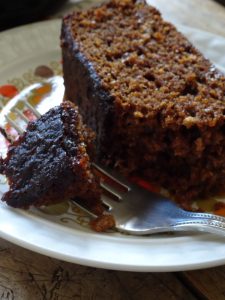 100 grams sunflower oil (I measure this in grams, because I tend to weigh it out in the same pan as the sugars, but if you prefer millilitres, it’ll basically be 110 ml)

115 grams black treacle or molasses (I use date molasses, as it’s easy to find here in the Middle Eastern shops)

To glaze: some of the stem ginger syrup from the jar (optional)