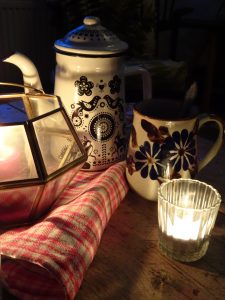 We’ve had a couple of lengthy power cuts in the last week. We seem to go through phases where we have no power cuts for months, then we’ll have days or even weeks of frequent disruption. Long-time readers will know my frustration with this.

There are the planned Bulgarian power cuts (a friend sent us a link to an online list of planned power cuts in our area and it was both hilariously long and, as it turned out, not that accurate). Then there are the unplanned power cuts, usually the result of some weather event or other. You know, like a single clap of thunder or a few snowflakes.

The average Bulgarian power cut can last anything from a few seconds (which is still enough to shut off the internet and throw you off the video call you were on with a client. Not that this happens ALL THE TIME or anything) to four or five hours. One power cut, back in our first winter in Bulgaria, lasted literally days.

Normally, as soon as the lights go out and we hear the familiar drone of the backup battery pump on our woodburning stove kick in, I’m instantly stomping around the house, cursing the fickle electricity gods.

But every now and then I find joy in a long Bulgarian power cut. Especially in winter, when it’s snowing outside and the village is all muffled and quiet. After an hour or so, the woodburner’s backup battery runs out and the house falls truly silent. Trust me, you have no idea how much background noise there is in your house – the hum of the fridge, a roaring fire, your laptop fan whirring away, etc. – until it all just stops. It’s kind of thrilling to experience that kind of utter, utter stillness.

Part of me is also pleased to have my day’s work plans overturned. Even with a full charge on my laptop, there’s only so much work I can do during a power cut because a) we have no internet and b) my poor old eyes struggle to look at a lit-up screen in a dim room.

Even though I know I’ll be playing catchup for the rest of the week, sometimes it’s nice to be forced to stop working for several hours on a Tuesday morning.

There have been a few memorable and joyful power cut days like this. There was that time early in the 2020 lockdown where we stayed in our pyjamas all day and I tried to teach Rob how to crochet. Another time I knitted a bobble hat in one sitting. It was during a long power cut that I listened to a podcast for the first time ever (for years, I didn’t really get the whole podcast thing. I’m such a curmudgeon sometimes all of the time).

More often than not, we’ll simply cook a big meal, something much slower and nicer than our usual lunchtime fare, and go for a leisurely middle-of-the-day walk.

When the power went off for four hours last Tuesday morning, and it was snowing heavily outside, it was magical. (You know, once the goddamn backup battery stopped droning.) I spent ages just looking out the window, watching the snow coat the car. How often do you just stand there and look out the window?

The previous power cut happened in the evening, and it reminded me how beautiful our house is by candlelight. The bumps in the lime plaster, the shadows on the walls, the hypnotic flicker of flames… As it got darker and darker outside, we sat with the curtains open, candles lit, watching the outline of the mountains fade. And we listened to a ghost story podcast, which was even more fun than usual in the dark.

Don’t get me wrong, our life here in Bulgaria is already pretty darn chill. So it’s not as though the only time we destress is during a power cut. More, it’s the sudden stripping away of structure that I enjoy. As someone who needs structure (like a poet needs the pain, as Jon Bon Jovi would say), having the odd morning or evening routine turned on its head without warning is good for me.

So when the power cut out again on Wednesday morning, just before I was about to start work, I didn’t stomp around cursing the electricity gods. And when the power came back on just 10 minutes later, I admit I was a tiny bit disappointed.