170. What to do with all those courgettes

I’ve not yet found a great way to preserve courgettes. We recently tried fermenting courgette batons in brine (mixed with dill flowers, horseradish leaves and sour cherry leaves of all things – it’s a Ukrainian recipe). The results are currently sitting in the fridge, waiting for the flavours to develop, so the jury’s out on whether this is worth doing. It didn’t even use up that many courgettes.

And I know you can freeze grated courgette in bags, ready to use in cakes and tarts in the winter, but, honestly, who wants to eat courgettes in January? I don’t, which explains why our frozen courgette efforts just sit there taking up space in the freezer all year. Now, I prefer to try and use up every last courgette during the course of the summer and autumn.

Here’s how we do it…

A big batch of courgette fritters uses up more courgettes in one go than anything else. Double the recipe if you have to. Triple it, even. You won’t regret it. Courgette fritters are amazing, and there’s no shame in eating them for two days in a row. Our favourite method is a Greek recipe from a book called Vefa’s Kitchen (they’re big, fluffy courgette balls rather than flat fritters), but you might like to try:

Serve the fritters/balls with tzatziki and salad. I also like them with a smoky, spicy tomato or pepper sauce dolloped on top.

We had a lovely courgette dish in Greece once, where the courgettes were simply cut into discs, coated in flour and deep fried. I support the deep frying of pretty much any vegetable. Again, serve with tzatziki. A nice, cold beer wouldn’t go amiss, too. Maybe a harbour view…

(And if you’re really into deep frying. Try these courgette fries with sumac salt from Sabrina Ghayour’s book Sirocco. Uses up loads of the blighters.)

Back to Greece, and I urge you to give briam a try, a simple baked vegetable dish of layered courgettes, potatoes and tomatoes. When I first came across the recipe I thought it might be a bit dull but it’s surprisingly delicious in real life. I think it’s the long, slow bake (90 minutes) that makes it so tasty.

Not that I’m obsessed with Greek food or anything, but I’m also dying to try this Greek courgette filo pie (spanakopita) recipe by Ottolenghi. A friend has made it a couple of times this summer and says it’s great.

I like colour. My wardrobe is full of clashing colours and prints, so much so that, even though I have enough items to wear a different outfit every day for probably a year, none of it sodding goes together. Anyway, I’m the same with food, and I love to see loads of different colours on the plate, so although it may sound weird, thin courgette slices work well on a homemade veggie pizza, accompanied by red and yellow tomatoes, and dollops of bright green pesto.

Again, when it comes to colour, I’m like an excited toddler with bad eyesight. So when I saw ‘Rainbow Salad’ on a menu last time I was in England, I obviously ordered it. It was made up of ultra-thin slices of raw beetroot (a mixture of red, golden and stripy), plus long, thin ribbons of green and yellow courgettes, vibrant red cherry tomatoes and green leaves, dressed with a simple oil and balsamic vinegar dressing. Imagine me reaching out a pudgy hand and dribbling ‘pretty … gimme’ and you’re not far off my actual reaction when the plate arrived.

If you’re not obsessed with packing as many colours as possible onto a plate, try making a simple side salad of thin courgette ribbons (cut with a vegetable peeler) tossed with dill and a lemony vinaigrette dressing, and left to muddle for half an hour before eating. Nice with barbecued pork skewers, I reckon.

And now we get to possibly my favourite use of courgette: cake. If you’ve never tried grated courgette in a cake, you should give it a go. The courgette kind of melts into the cake, so it’s not obvious you’re eating a vegetable (great for tricking children), and it makes the whole cake lovely and moist.

I regularly make this courgette chocolate cake (without the margarine icing) and it’s such a useful recipe to have up your sleeve because you don’t need eggs or butter. So even if your fridge is bare, you can still cobble a cake together. The batter is extremely dry and breadcrumby until you add the grated courgette. Don’t worry, that’s normal.

Also, I’ve been making my own adapted versions of a BBC Good Food courgette and orange cake recently. It’s one of those brilliantly easy, all-in-one-bowl, no-need-for-a-mixer type of recipes. The original recipe is here, but I’ve been tweaking as follows: 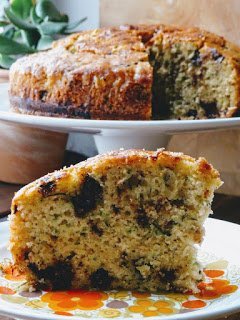 Follow the BBC recipe but, instead of putting in 100g of sultanas (really? Sultanas? WTF BBC), add 100g of chopped dark chocolate. Much, much better in my opinion. It’s like a Terry’s chocolate orange but in cake form.

Personally, I don’t bother to make the cream cheese frosting from the recipe. Not because I don’t like frosting (I could happily eat a bathtub of the stuff); sometimes I just want a nice, plain cake. But if I was feeling decorative, I might be tempted to melt down some extra chocolate and splatter it over the top, Jackson-Pollock style. 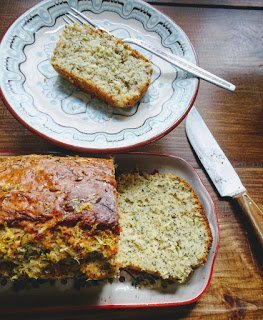 There are lots of recipes for this sort of cake online but, buoyed by my chocolatey orangey success, I decided to adapt the recipe myself. Here it is:

You could top this with a cream cheese frosting, like the BBC recipe (using lemon zest in place of the orange zest). But I like to make a runny glaze by stirring some icing sugar into the juice of one lemon, and adding lemon zest plus a sprinkling of dried thyme leaves. Simple and pretty.

I’ve also made this cake with a syrup instead of any kind of icing. If you fancy trying that, bring 100ml water and 75g of sugar to the boil in a pan, add the zest and juice of half a lemon, and boil for five or 10 minutes until it starts to thicken. As soon as the cake comes out of the oven, prick it all over with a skewer and pour the warm syrup over the top.

I think both cakes are nicer (as in, moister) the day after they’re baked, so keep that in mind if you’ve got the vicar coming over for afternoon tea.

Finally, the original recipe says to store the cake in the fridge, but I don’t bother if it’s only sitting around for a couple of days – I guess it’s more important for the frosting rather than the cake. But I’m pretty cavalier about these things. Last weekend, I ate a week-old piece of the chocolate-orange version, even though it was starting to develop a bit of a mouldy fuzz. (What? Only a very slight fuzz, which I scraped off. And you know what? It was still really moist!)