Did someone say cider?

Is there a better word to describe cider than ‘scrumptious’? If there is, I’m all ears. We’ve bottled this year’s bounty and have already started drinking it. It’s so … scrumptious. There is no other word, is there? Sadly, we’ve got about 10 bottles less than we had last year, because the first barrel turned to vinegar (see below), but 40 litres is better than 0 litres. Am I right, chaps?

So, 2017’s bonus: 18 bottles of cider vinegar. This, too, is delicious (not scrumptious), although there’s a limit to how much cider vinegar two people can get through in a lifetime.

We’ve had the first hard frost, so most of the garden has now died back. I do love a good frost, even if it does kill off the dahlias – pretty much the last thing flowering in our garden. And the courgettes finally died! We picked the last ones on October 29th, the day before the frost. That has to be a record for courgettes, no? Giving fruit from June to the end of October? Let’s just say I’m ready for a break from courgette fritters.

It’s all feeling very wintery now as we start stocking up the pantry and freezer for January and February, and stockpiling loo rolls by the hundreds (I’m exaggerating, but only slightly). Wood Store Number 1 (the one closest to the house) has been filled with wood and kindling for this winter, and Wood Store Number 2 (behind the house) is chocked with next winter’s wood, which Rob has almost finished chopping and stacking.

As an anally retentive freak of nature, I bloody love prepping for winter because it means I can write list after list after list. Currently on my fridge:

– The ‘autumn gardening jobs’ list, reminding us of everything we need to do to put the garden to bed.

– The usual ‘shit we need from Kaufland’ list, which starts getting pretty big at this time of year so that we can stock up on dried goods, frozen chicken necks for the cats and other freezer stuff.

– The ‘Lidl’ list – just because Lidl is my new favourite place in Bulgaria (Carnaroli rice! Meat that doesn’t taste weird! Those biscuits with the solid block of chocolate on top!), and I’ve finally realised the Lukovit Lidl is not really any further than Kaufland in Botevgrad.

– The ‘fancy Christmas list’, which mainly comprises cheese, crackers, a bottle of bubbly and other treats that we need, yes, NEED, for Christmas.

– The ‘UK list’, with things to get on my next visit (Benefit foundation, decaf tea, 3for2 mascara from Superdrug. You know, the essentials).

– The ‘winter gardening’ list, with the seeds we plan to start off indoors as winter winds down.

Lols with the neighbours

Recent highlights from next door include being served homemade chicken soup, complete with feet. Rob got a whole foot in his bowl. I got off lightly with a toe. Also, Svilen mistook a sausage for the TV remote and tried, quite earnestly, to change the channel with it. We all had a good laugh at that one.

Finally, check out this beautiful sunset from the other week. There’s no better end to the day than that. Other than a glass of cider, of course. 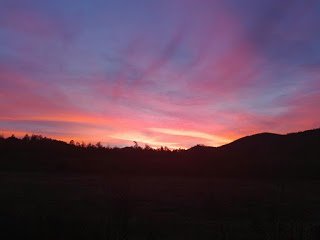