My God, the weeds have been rampant this year. All that heavy rain, followed by scorching sun, followed by more rain, then sun, sun, sun… The veggies and flowers have loved it. But so have the weeds. We’ve got a ridiculous problem with bindweed in our garden, which we’ve always managed to keep on top of, but this year it’s out of control. There’s even one bindweed tendril growing up between some stones inside our house. I think it’s eventually going to grow all through the house, like a dystopian fairy tale, and suffocate me in my sleep.

No wonder I’m so keen to get out and go on more trips. Last week, we went to Ribaritsa, near Teteven, to visit ‘The Bloody well’ – the place where Bulgarian revolutionary Georgi Benkovski’s head was washed after it had been chopped off by the Ottomans. (I should point out this all happened in 1876, not, like, last October or anything. Isn’t history just the grossest, goriest, most fascinating thing ever? There was a coach-load of kids there having a good time, and I reckon it’s the sort of historical yarn I would have found disgusting-slash-compelling as a child. There were picnic tables, too, plus a playground and café. I’m not sure what Benkovski himself would make of it all.) 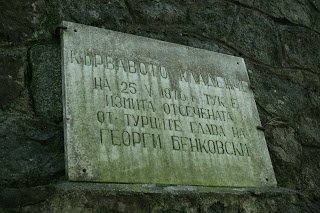 Ribaritsa is close to the edge of the Central Balkan National Park, so we went up into the park and walked one of the trails for a bit, following a river through pretty forest – we didn’t follow it far enough to get anywhere exciting, but enough to say we’ve finally visited one of the national parks! When we go back, wearing more sensible footwear, we’ll follow the same trail all the way up to hizha Benkovski, a hut for hikers located higher up in the mountains.

Our next little foray, sometime next month, is going to be down to Melnik in the south – home of the delicious wine, some freaky sand pyramids, Rozhen Monastery and, hopefully, one or two friendly vineyard owners who’ll let me sample plenty of their good stuff. After that, who knows what our next excursion will be? We’ve still not seen the famous Seven Lakes in the Rila Mountains, or the Rila Monastery, which is a UNESCO World Heritage Site and only 200km from us. It’s bad isn’t it, that we haven’t seen this stuff? Mind you, it’s not like we saw everything worth seeing in the UK. I’ve never seen Stonehenge up close. I’ve never been to the Tower of London. I’ve never climbed Snowdon.* Life’s not one endless road trip, unfortunately. Wouldn’t that be great? *dream sequence*

Anyway, you tell me, what else is an absolute must-see in Bulgaria? We know Sofia well, we’ve seen a lot of the coast (well, from Burgas down to the Turkish border), we’ve done Plovdiv and VT, we’ve done Troyan Monastery. I want the obvious places, of course, those places that we should beat ourselves with a big stick for not seeing yet. But I also want the more leftfield suggestions, things we might not come up with ourselves. You know what I mean, right? Over to you.

*I did, however, once see Katie Price and Peter Andre at the airport with all their kids (it gets better) being escorted by Maria off Airport, which I’m sure you can imagine was very exciting. I also once saw a rat the size of a beaver. And I went to see Titanic three times at the cinema. These are the things I was doing instead of important cultural/historical/outdoorsy stuff.