63. The one where my parents come to stay, I am reunited with my beloved sofa, and we all embark on an epic road trip back to the UK 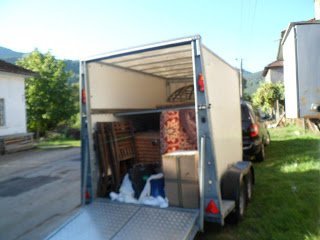 Better than Christmas this was, believe me.

I start with a confession. These events actually took place at the end of August but I’ve been too traumatised to write about it until now. And busy. I’m a busy, busy, traumatised individual. So don’t give me a hard time about neglecting the blog, okay? I promise to be a better blogger from now on.

The week after we got back from Greece, my folks drove (yes, drove) out to Bulgaria and hauled a trailer containing the last of our stuff from the UK – stuff from our old flat that has been in storage for TWO YEARS – including, most importantly, my sofa. My sofa is the king of all sofas. It’s the sofa boss. The Godfather of sofas, if you will. So, there was no way I was going to leave it behind and trade it in for some Ikea jobby. I’ve not seen a single Bulgarian sofa shop since we moved here, nor have I seen many sofas in actual Bulgarian houses – they seem to prefer beds or benches to sit on.

Imagine a beautiful world without DFS adverts…that’s what Bulgaria is like.

So my folks took two days to drive out. The route took them through France, Germany, Austria, Hungary, Romania and, finally, over the Danube into Bulgaria. After making it all the way across Europe, they were stopped by the police 10 miles from our house! There’s relatively little crime in Bulgaria (except for the organised variety of course) so the police like to focus their attentions on motorists instead. But after a swift check over their documents they were sent on their merry way.  They finally arrived with us about midnight, looking rather dishevelled and pissed off.

They mumbled something about diversions and ending up in a cemetery. It wasn’t exactly clear what happened, but it certainly put the willies up my brother. And apparently the border crossing into Bulgaria was interesting, with my mum being told she had to purchase ‘compulsory’ health insurance for 8 euros each, despite having health insurance already. When we later looked over the ‘compulsory’ insurance documents, it turns out she had purchased one policy in the name of “Sue W” (my mum’s surname is double barrelled and I think the man couldn’t be arsed to write out her full name). More worryingly, the second policy was simply in the name of “Jesus”.

Anyway, after a good night’s sleep (and the obligatory morning coffee with the neighbours) we unloaded the trailer and were reunited with our prized possessions – paintings/pictures, the Daddy of all sofas, a farmhouse table that was an eBay bargain, and lots and lots of cookbooks.

Soon (too soon) it was time to return to the UK. And this is where it gets a bit traumatic. Rob and I were hitching a ride back in their car – I was due to fly to the US from Heathrow on the Sunday, and Rob was going to see his family in Kent for a few days. So we set off on Thursday morning, expecting to arrive back in the UK late Friday night/early Saturday morning. It didn’t quite go to plan.

We made it as far as the Romanian/Hungarian border before we broke down.

“Everyone’s looking at us,” Mum said, as we sat in huge queues at the border crossing. “There must be something wrong with the car”.

“You’re being paranoid, no one’s looking at us,” we said. (As a car crawled by with the inhabitants staring at us).

Eventually, with smoke wafting from under the bonnet, we piled out of the car. 50 metres from Hungary. Now, you might think that Romania is the last place you would want to break down. But actually, we were towed to a really good all night garage just up the road. (The tow man was amazing – camouflage shorts, socks, sandals and a huge gold chain holding his glasses on his head, he was like a Romanian Mr T.) The garage owner spoke good English, gave us coffee, and even let us use his “wiffy” as much as we wanted (that’s wi-fi to you and me). Unfortunately it took a few hours to fix the broken belt as the suppliers weren’t open overnight, so we ended up getting back on the road a good 12 hours behind schedule.

This meant we would miss our Eurotunnel slot. We called them and, because we were towing a trailer and it was the busiest weekend of the year, they couldn’t offer us an alternative booking that weekend. Bearing in mind I was due to be flying out of Heathrow on the Sunday, I was starting to panic a bit. We called ahead to P&O and managed to get a spot on a ferry to Dover for the Saturday evening for a mere £300.

So the five of us drove across Hungary, Austria, Germany and France – sleeping in the car, eating Burger Kings, and watching my ankles swell up. Good times.

All was going okay and we were on (the revised) schedule, when we hit huge traffic jams going into the ferry port at Calais. Turns out a ferry had broken down and they were running a massively reduced service. Typical! We just made it on to a ferry at gone 11pm on the Saturday – and we were one of the last cars on the ferry. They nearly didn’t let us on because of the trailer.

We finally arrived home in Portsmouth just before 5am on the Sunday, and a cab was booked to take me to Heathrow at 5.30am. I hadn’t washed in 3 days. I felt disgusting. I hadn’t packed. I hadn’t slept in a bed for 3 nights. I showered and shoved random clothes into my suitcase for the 10-day business trip ahead. I was relieved to find mostly sensible outfits when I unpacked in America. Except for the five pairs of blue tights – they were a bit unnecessary.

Here is a summary of the road trip in the form of an internal monologue:

Romania: Oh this is nice. Their roads are much better than ours in Bulgaria. Looks quite a bit richer than Bulgaria in fact. It’s pretty here. I want to come on holiday here. Oh look, there’s Serbia over the river, that looks pretty too. I want to go on holiday there. This is fun. ROAD TRIIIIIIP! Aaaaarrrgh, inconvenient mechanical failure. Bummer.

Hungary: Okay, we’re back on track now. Come on, let’s eat those miles. Hmm, this looks a bit like Romania. Quite pretty churches. I’m getting hungry but we can’t stop until Austria. Sigh.

Austria: Burger King, yay! And now for a few hours kip in a car park, yay! EasyJet: all is forgiven.

Germany: I have to pay how much to go to the toilet?? I think my ankles are swelling up.

France: This place is full of English people. I can’t remember when I last saw a French car. And I smell.