Truth be told, they are utter bastards who do nothing but fight and poo and ignore us. Even though we’ve been in their lives since day one and lovingly assisted their teenage mum in rearing them, they show us no affection whatsoever. Open hostility, most of the time. Once, Iggy purred when Rob stroked him. Once! In 9 weeks. Mainly, they just want us to go away.

But at least they’re cute. 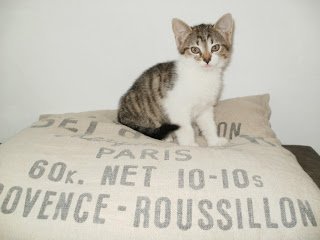 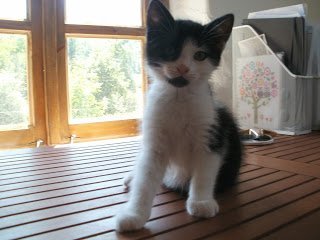 Pepper is a princess whose hobbies include sitting on a cushion and being aloof. She is utterly indifferent to humans.

Iggy is a certified mentalist whose hobbies include growling, climbing legs and biting. He recently chased his own mother into a box. He will, however, tolerate being picked up and cuddled. For ten seconds. And only if he can bite your finger.

I think this is what goes through Iggy’s mind on some sort of maddening loop:

“Oooh a toe, bite it! Oh no, it belongs to one of THEM. Now they want to cuddle me. Quick, run away. Into the cupboard where I can climb all over the plates. Hee hee, I’m so clever. They’ll never catch me in….doh, damn humans. Run up a curtain. Mummy, fight me! I win! Tired. Bored. Into the pantry, where I can sit in the veg rack in peace. Mmmmmm, potatoes, I love sitting in with the potatoes. So comfy! I could sit here all….Bored. Run up a curtain. Pepper, fight me! I win! Run into the bathroom. Take that, toilet roll! Oh, excellent, a freshly cleaned litter tray – I’ve been saving up a nice big poo for that. Oi, human. Meeow. Feed me. Don’t come THAT close, what’s wrong with you? Put the bowl down over there. There, I said! Don’t TOUCH me for Christ’s sake! Grrrrr. Eat. ZZZZZZZZZZ”

Exhausting, isn’t it? Trust me, cats should never outnumber humans in a household.

After making a brief but daring break for sexual freedom, Moona has now been spayed (she ran off with a ginger boy cat for a day, the dirty little minx). So at least we won’t be welcoming any more unfriendly additions to the family! 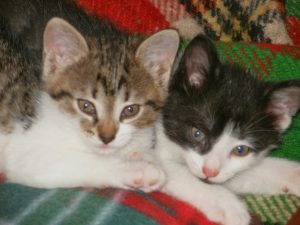 We hate you. You’re not our real parents.