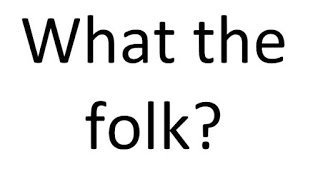 A few mornings a week we go round to our neighbours’ house for coffee. There’s a GMTV-style programme on from 9.30am called Predi Obed, which we all watch together with interest, Svilen and Penka explaining in great depth what each story is about (like that helps us!). Then, come 10am, the neighbours change the channel in favour of….music television.

Their favourites are the folk channels. Here I shall try to convey a standard Bulgarian folk music video, although I fear I cannot do their utter awesomeness justice.

Men and women in traditional garb embark on some country dancing in a field. Sometimes this involves a white hanky – I think colds must be very common. Everything is very green and lush and there are mountains in the background. This is a beautiful land.

What’s this? A beautiful woman with impossibly big hair begins to sing in front of a traditional Bulgarian stone house. She packs a ludicrous number of notes into one syllable. (I read this week the technical term for such singing is melisma. You might call it warbling. I call it mega-warbs). Often she is wearing a traditional costume. Sometimes she is wearing a bridesmaid’s dress. That would explain the size of the hair I guess. Frequently, the lady is rather, erm, well endowed.

Sometimes she is accompanied by a male singer who, if I may be so bold, rarely matches the lady’s beauty. The same hand gesture accompanies almost every line (the gesture is a little like ‘this way madam’, ‘do take a seat’).

Sometimes the location varies and the singers are, inexplicably, in a hotel conference room.

The music is excellent, I love it! It’s usually really jolly and up-tempo (except for one rather alarming song we saw where a moody goth-type girl meandered through the woods very slowly looking very intense – and rather Shakespeare’s Sister). The beat is borderline frantic. Oh, all right, it’s absolutely bonkers – like a barrage of instruments competing for your attention.

And this brings me on to my very favourite videos. The ones with the bands. There is always a keyboard player, always an accordion player, usually a drummer, a sax or clarinet player (or both – joy!) and sometimes a guitar player. Most of the time the band will all be wearing the same outfit, like an antique boy band. And they’re all so smiley, I love them. There is one cheeky accordion player that we particularly favour, he really feels it, you know? He’s got moves like Mick Jagger, baby. If Mick Jagger could move with an accordion strapped to him*. I may even get married just to hire one of these bands and dance in a grey conference room with big hair and a wonderbra.

Shamefully, don’t ask me what they’re actually singing about. I can only make out the odd word – mother, love, mountains, plains, wine. Boring!