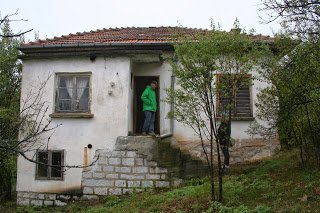 We have travelled to Bulgaria for 8 days to see some houses. We’ve found a great estate agent (www.offbeatbulgaria.eu) – Max is an English guy who has been living in Bulgaria for five years. He has bought and renovated his own house and has also converted his barn into a guest house. This is our home for five days in an unseasonably cold October 2010.

We have planned three days of house viewings and a further two days of getting to know the area. The remaining three days will be in Sofia for sightseeing and general time off (drinking coffee and being all European and stuff).

Day one of viewings and we’re already off to a good start. None of the houses take our fancy that day but we know very quickly that we have found the right region for us. An hour from Sofia (the capital city and international airport) is an area of beautiful mountain villages, rivers, caves and monasteries. It is stunning, even in a gloomy October, and we know we’ve made a good choice in our search area.

Selling a house is very different in Bulgaria. There is no concept of ‘dressing’ the house for viewings and not a whiff of fresh coffee brewing or bread baking. Phil and Kirsty would not be popular here. Many of the houses we see are empty, having been left to younger generations after the death of the owner. I say empty – empty in the sense of uninhabited. They are actually FULL of stuff – jam jars, tiles, furniture (hospital beds are a favourite), even old family pictures. Everything you see is included in the purchase! Our personal favourite item is a giant gold-plated Casio wristwatch style clock on a wall.

Day two of viewings is much better – we really love two of the houses. One is close to a really well developed town, but in a quiet hamlet, up a track. It’s a quirky house built into the stone of the mountain. It would be great for us and really gets our creative juices flowing. The up-a-track location is slightly worrying, especially for the harsh winters here. But the views of the surrounding hills are fantastic. Sadly you can see (and hear) in the distance a motorway. We um-and-ah about this for ages, standing in the garden with our eyes closed pretending to be sitting and sipping wine. It eventually takes two viewings and hours of discussion to finally rule it out. We’re quite noise-sensitive people and, although the road is in the distance, it’s too big a compromise for us.

The second house that day deserves a post all of its own, so read on…